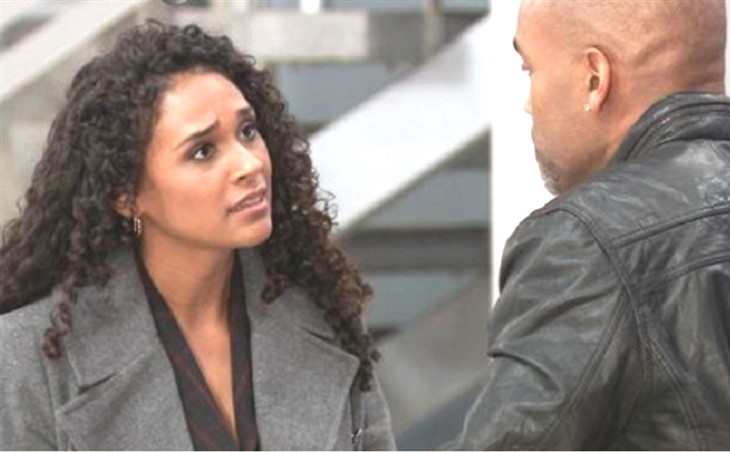 General Hospital (GH) spoilers for Thursday, July 8, 2021, reveal talk of divorce all over Port Charles, but might Curtis and Jordan’s divorce get called off?

General Hospital Spoilers – Not The End For Curtis And Jordan Ashford?

Curtis (Donnell Turner) and Jordan (Briana Nicole Henry) haven’t been together since Christmas, but they are still married. It was clear after Curtis was shot how much Jordan still loves him, but Curtis hasn’t seemed interested in reconciling. Instead, he’s been more interested in why Portia (Brook Kerr) backed off the idea of them having a romance.

On Thursday, he goes to Jordan and asks her if a divorce is what she really wants. Does he believe he is the one who pressured Portia to want to just be friends? Meanwhile, the person who did pressure Portia has an informative lunch with TJ (Tajh Bellow) at Charlie Pub and tells him that it ain’t over till it’s over. For someone who never wanted Curtis with Jordan to begin with, Stella (Vernee Watson) sure has changed her tune.

General Hospital spoilers reveal Alexis (Nancy Lee Grahn) remains in solitary confinement for trying to practice law while behind bars by helping Shawn (Sean Blakemore), but she seems to have an interesting visitor on Thursday. As long as that visitor is not her alternate self as it was on Monday, it looks like she may rejoin the rest of the prison population.

She has no idea Molly (Haley Pullos) is on the case and is also trying to help Shawn by going to work for Judge Carson. When Molly meets with the judge at the Metro Court, she tells her she hopes they can have a mutually beneficial relationship.

Next on tomorrow’s General Hospital episode, Nikolas (Marcus Coloma) looks like he is about to give in to Ava (Maura West) and give her that divorce she wants, despite the fact that she doesn’t really want it.

He goes to Martin (Michael E. Knight) for divorce help while Ava discusses the stalking situation with Portia. Neither mother knows that the stalker is actually with Trina (Sydney Mikayla) and he is none other than a now-grown Spencer Cassadine (Nicholas Chavez). Stay tuned to General Hospital weekdays to see how these stories play out.

The Bold And The Beautiful (B&B) Spoilers: Hope Races To Save Thomas