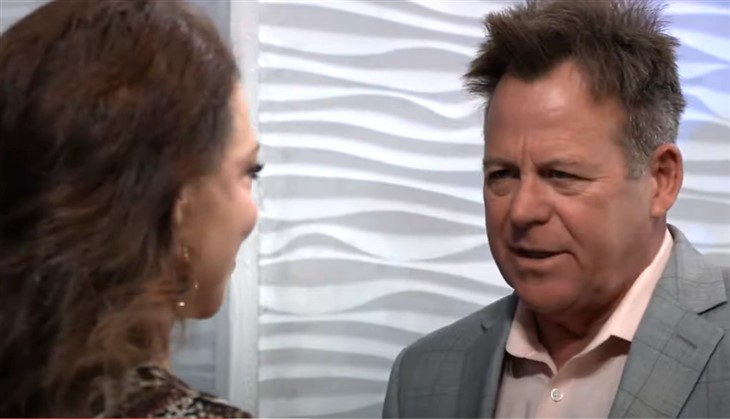 General Hospital spoilers and updates reveals fans of Scott Baldwin (Kin Shriner) and Liesl Obrecht (Kathleen Gati) are not happy that Victor Cassadine (Charles Shaughnessy) is back in the picture. “Siesl” has been growing on the viewers and many find them an adorable couple. Kathleen Gaty’s Twitter feed has quite a number of her followers expressing that General Hospital had better not break the popular couple up. Shortly after they first got together the duo went missing from the screen and it was thought that perhaps they had gone their separate ways. Fans because excited when the couple was scheduled to go to St. Lucia for a romantic getaway and were sidetracked when they first encountered trouble on the plane.

It was assumed that Peter August was behind Scott being dumped out of the moving private jet but now everyone knows that Victor Cassadine was behind it all. On social media and Facebook groups, those who love Scott and Liesl together have been sharing their outrage that another man has entered the picture. Hopefully, Obrecht will be found by Anna Devane (Finola Hughes) and Valentin Cassadine (James Patrick Stuart) or she might escape her luxurious prison. Victor revealed that he had been keeping an eye on Liesl; during the time that he was supposed to be dead. He could see things were getting serious with Scott and decided to put a stop to it.

Siesl fans will have to sit tight and let this situation play out and hope that the writers bring their favorite duo back together. A growing number who watch General Hospital are saying that Scott and Obrecht are refreshing and bring something fresh and different that fans are eager to watch play out. Some viewers say they enjoy seeing a mature couple in love as opposed to a triangle such as with Michael Corinthos (Chad Duell), Willow Tait, and Hamilton Chase (Josh Swickard) or the situation with Mike/Sonny (Maurice Benard) and Nina Reeves (Cynthia Watros) and Carly Corinthos (Laura Wright) and Jason Morgan (Steve Burton). Be sure to stay tuned to General Hospital and find out what happens next for Scott and Liesl.