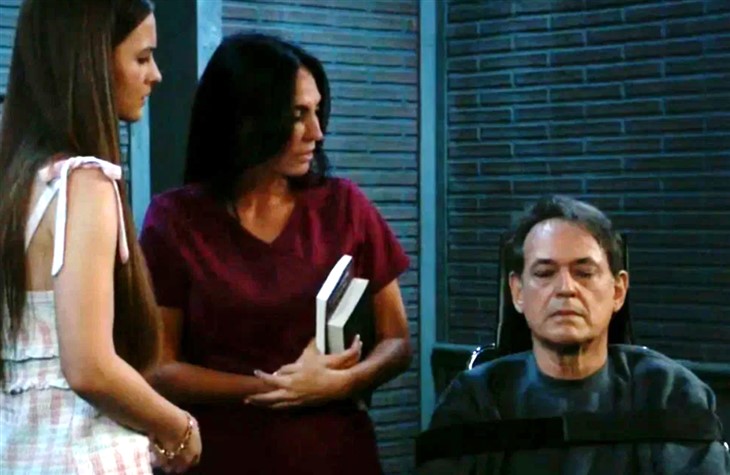 General Hospital spoilers suggest that there may be a deeper connection for Esme Prince (Avery Kristen Pohl) than just Spencer Cassadine (Nicholas Chavez). Could Esme be related to someone in town, perhaps Ryan Chamberlain (Jon Lindstrom)?

General Hospital’s Esme seems to idolize Ryan. Ryan and Esme also seem to know each other. The way Esme smiles at him leads one to believe that they could have a past together. Although Ryan has been a serial killer and Kevin Collins (Jon Lindstrom) kept him hidden for years, could Ryan have had a child with someone? Perhaps Esme is the product of a close relationship in Ryan’s past that no one knows about. After all, Kevin didn’t know that Ryan has escaped until he took over his life. Ryan could have had a fling with an admirer in the facility Kevin had placed him in or he could have walked out from time to time unnoticed until he was ready to make his move on Kevin. Whatever the case, Esme befriending Spencer seems suspicious.

General Hospital’s Esme has known about Spencer stalking Ava for months. A sensible girlfriend would have tried to stop Spencer instead of taking things much further than Spencer would have. It seems clear that Esme was planted into Spencer’s life by someone evil and that person could certainly be Ryan. Once Spencer turned down Ryan’s olive branch by sending his letter back, Ryan could have sent Esme to befriend Spencer. Spencer admitted that he didn’t think Esme would want to be with him making that much more likely to be the scenario. Could Esme be related to Ryan without Kevin knowing it?

General Hospital’s Harmony Miller (Inga Cadranel) has noticed Esme’s pull to Ryan and warned Alexis Davis (Nancy Lee Grahn) that she is trouble. Will this warning help Alexis to save Spencer from Esme? Will this huge red flag alert Spencer to something he hasn’t even considered about his girlfriend? Could Kevin know of this connection and stay quiet about it? Would Kevin possibly stay quiet about Spencer being with someone related to Ryan? If Ryan does know, what will happen when the truth comes out?

Something is definitely going on between Esme and Ryan. It is obvious that the two have some sort of connection. How far will Esme go to please Ryan? Is Esme carrying out Ryan’s bidding while pretending to help Spencer? Is Esme far more dangerous than Spencer ever imagined?