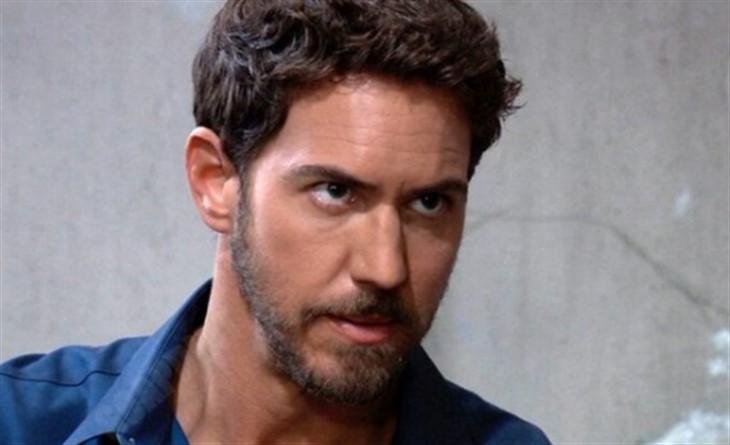 General Hospital viewers will recall that the conundrum box was found in Faison’s office after his death. It bore a Cassadine crest on it, showing that it had once belonged to a Cassadine. It was brought to Robert Scorpio (Tristan Rogers) who was still in the WSB at the time, back to the WSB for safekeeping and code cracking and no more had been heard of it. But now that General Hospital viewers know that Victor Cassadine, (Charles Shaughnessy) has been alive all this time, and he was head of the WSB until his “death” in 2014 he likely has contacts still in the WSB who would have turned it over to him.

General Hospital viewers know that Victor has been working with Peter August – or, perhaps just pretending to. It is a possibility that he could have gotten the conundrum box back, but that it was Faison who had the combination. There is strong evidence that he has actually been working behind the scenes for a while since the WSB neuropsychology clinic Dr. Warren Kirk (Jamison Jones, Christopher Cousins) worked at smacked of Crichton-Clark which was headed up by Victor also. General Hospital viewers know that Victor knew about Kirk’s obsession with Liesl Obrecht (Kathleen Gati) and had told her he had been concerned!

General Hospital viewers will recall that the conundrum box took a special combination to open it safely, lest it explode – as Robert explained when it was brought to him. There is a slight possibility that it actually could have been Victor’s in the first place, since it bore a Cassadine crest. General Hospital viewers will also recall that Victor had tasked Peter with finding the activation key – which turned out to be a tarot card with a tower on it – to activate Drew Cain’s brainwashing.

General Hospital viewers will recall that this is a very similar type of brainwashing to that which Liesl herself had hypnotized Dante Falconeri (Dominic Zamprogna) only his activation was the clicking of a pen. No doubt if Liesl had the tarot card she’d have been able to deactivate Drew’s brainwashing! Chances are, since Peter got the activation key on his own and lied to Victor, he could have also had the combination to the conundrum box because it was taken from his father’s office before he could find it and no one could open it.

Victor obviously didn’t know what happened to the tarot card and Faison probably stole the conundrum box before the explosion of the Crichton-Clark clinic in which Victor had previously been thought to have been killed! General Hospital viewers know that the conundrum box could hold other things which Peter could weaponize against those who are opposing him, so it will be important not only to capture Peter, but to capture the conundrum box!

Days Of Our Lives Spoilers: Susan Banks Learns The MarDevil Truth – Theo Back