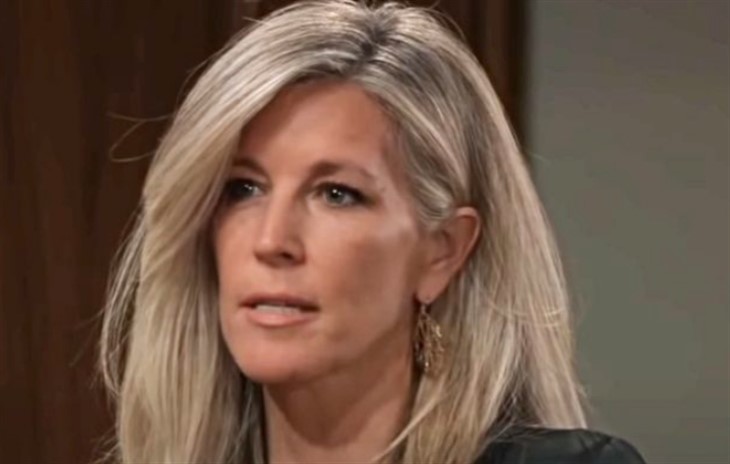 General Hospital spoilers for Wednesday, May 19, 2021, reveal Carly sticking her nose where it doesn’t belong once again, but hey, at least she feels bad about it, right?

The knowledge of Sasha’s (Sofia Mattsson) pregnancy makes Carly (Laura Wright) believe she holds all the cards now. She can save Jason (Steve Burton), or so she believes. To that end, Carly (Laura Wright) meets with Gladys (Bonne Burroughs) to make an offer she can’t refuse. Give up the goods on Cyrus (Jeff Kober) or Brando (Johnny Wactor) will suffer for sleeping with a woman Cyrus wanted.

It sounds like a convoluted idea but if Gladys can prove Cyrus set up Jason (with Gladys as a false witness), then Jason can come home, right?

It looks like Jason is getting used to being on the run and doesn’t expect to return to Port Charles so soon. He also doesn’t get why Britt (Kelly Thiebaud) is constantly threatening to leave him.

Meanwhile, Brando confronts Sasha and tells her he needs to know if she is pregnant with his child. General Hospital spoilers say that Sasha sees the situation as a way to have a fresh start. Does that mean she tells Brando they are going to be parents?

Sonny (Maurice Benard) and Nina (Cynthia Watros) finally think they have figured Elijah out. He brings fake crime to communities to bring down property values. Apparently, he is the one who wiped out Corinth. It wasn’t a serial killer after all in the 90s.

Sonny and Nina confront the man who first tried robbing the Tan-O when he initially arrived in town and the man has quite a story to tell that Sonny seems to sympathize with. Will the man help him bring down Elijah?

GH Spoilers – Back In Port Charles

Chase (Josh Swickard) is getting more and more nervous as he sits in a hospital and wonders why Finn (Michael Easton) isn’t telling him everything. He demands to go home immediately.

Will this prompt Finn to tell the man he thinks of as his son that he’s been poisoned? It is awfully strange not to tell a man why he’s been in the hospital for weeks on end, but that’s exactly what has happened here. Stay tuned to General Hospital weekdays to see how this story plays out.