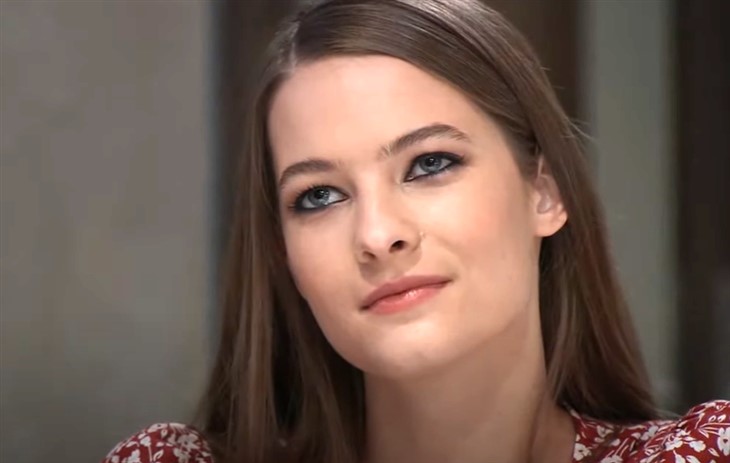 General Hospital viewers will recall that the last time that Esme and Spencer Cassadine (Nicholas Chavez) visited his great-aunt Alexis Davis (Nancy Lee Grahn) at Spring Ridge, Esme excused herself to go to the restroom. General Hospital viewers will recall that she didn’t go to the restroom, she went to see Ryan! She conned Harmony Miller (Inga Cadranel) with her desire to help people like Ryan, and mentioned she was studying for it at Port Charles University.

According to GH recaps, Harmony had told her how to apply for an internship but mentioned afterwards to Alexis that Esme was trouble! Apparently Ryan either already knew her and thought the same, unless he was encouraging her to hurry up and get the internship as he blinked “go, go, go”! Viewers know that Esme appears to be very interested in Ryan, although his twin Dr. Kevin Collins (Jon Lindstrom) doesn’t seem to interest her at all. There is no recognition from Kevin of Esme, but Ryan seemed to recognize her. Other General Hospital spoilers tease that Esme is Ryan’s daughter! Viewers have thought there is a strong family resemblance!

GH Spoilers – Esme Prince Revealed That She Was Adopted

Several weeks ago Esme revealed in an episode of General Hospital that she was adopted. It makes perfect sense that perhaps she sought out her birth parents and found her birth father to be Ryan, and glommed onto Spencer knowing he came from Port Charles.

A few years ago Ryan made worldwide news when it was revealed he was alive and had committed a series of murders! Later, it had been revealed that he had been rescued by DVX operatives after the fire in the Canadian funhouse where he was thought to have perished, and worked for them for twenty-five years, possibly as an assassin. Then they had contacted Kevin, because Ryan had gone off the deep end of lunacy, and if he had not taken Ryan into treatment they would have killed him!

Kevin felt sorry for his evil twin on General Hospital and brought him back to somewhat of a sense of lucidity, although sane may not be the word to describe him!

General Hospital viewers have long suspected that Ryan isn’t as “locked in” as he seems. The last time he was released from General Hospital after being stabbed in Pentonville Prison, viewers remember he smirked as he was being wheeled away, after Ava Cassadine (Maura West) tested him herself! She pinched his remaining hand hard with her long nails, and he didn’t even flinch.

The only problem is, he may have gone through training in the DVX to be able to resist torture worse than that – after all, he cut his own hand off in order to fool people that he had died when he was on the run in Canada!

Whether Ryan is actually “locked in” or not, it’s the perfect cover for murder and mayhem! General Hospital viewers know if Esme is sick enough to set Ava’s car on fire and leave a duplicated work badge for Kiki Jerome (Hayley Erin) who Ryan killed, she’s every bit as sick and twisted as who possibly may be dear old Dad! Esme just got one thing wrong with her attack – Ryan kept his victims’ drivers licenses, not their work badges! Esme looks petite and not strong enough to carry out killings like Ryan, but if she gets the job of working with him from Harmony, she can cover for him while he does the hard work!

How Old Is Nikki On ‘The Young And The Restless?’