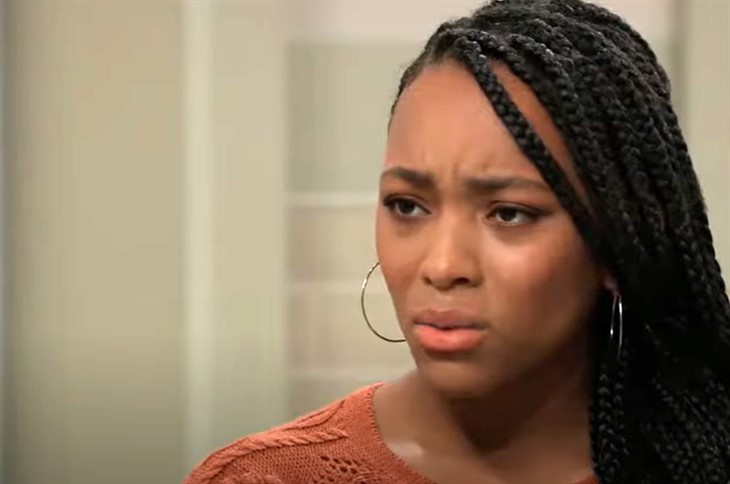 General Hospital (GH) spoilers tease Trina Robinson (Sidney Makayla) has had to deal with complicated family issues. She is the daughter of Marcus Taggert (Real Andrews) and Portia Robinson (Brook Kerr). Taggert has been investigating the criminal activities of Cyrus Renault (Jeff Kober).

Taggert has been working with Commissioner Jordan Ashford (Briana Nicole Henry) in his investigation. Cyrus has not wanted Taggert and Jordan to get evidence to take down his drug empire. General Hospital recaps reveal Trina and Cameron Webber (William Lipton) where going to go to a school dance. However they were kidnapped by Cyrus.

Taggert with the help of Curtis Ashford (Donnell Turner) and Jason Morgan (Steve Burton) went to save Trina and Cameron. Jason was able to help Cameron to get safety. Taggert and Curtis were able to get to Trina. However in order to get Trina to safety Taggert stayed behind so that Curtis could save Trina. Taggert was hurt and was taken to the hospital. It seemed that Taggert would be alright but soon died. Trina was devastated by the loss of her father.

General Hospital (GH) Spoilers: Jason And Anna Plot What To Do About Peter

According to GH spoilers, Trina blamed Curtis for Taggert’s death. She believed that Curtis could have done more to save Taggert. Portia and others tried to get Trina to understand that Taggert would have wanted Curtis to save Trina but she still would not forgive Curtis. Curtis felt badly that he was unable to save Taggert for Trina. However Curtis did not know that Jordan had helped Taggert to fake his death.

Both Trina and Curtis feel that they have been betrayed by Taggert and Jordan. Curtis has separated from Jordan. He is unsure if he can forgive Jordan because he blamed himself for Taggert’s death. Trina is unsure if she can forgive Taggert for making her believe that he was dead. Curtis hopes that Trina will be able to forgive him for what happened to Taggert. Will Trina forgive Curtis now that she knows that Taggert is alive? Will Trina be able to forgive Taggert for deceiving her?

Tune into General Hospital to find out who Trina will be able to forgive.  Check back here for more GH spoilers, news, and updates.

Jovi Dufren And Yara Zaya Will Star In Season 6 Of 90 Day Fiancé: Happily Ever After?

90 Day Fiancé Spoilers: Omar And Avery Have Something To Celebrate!