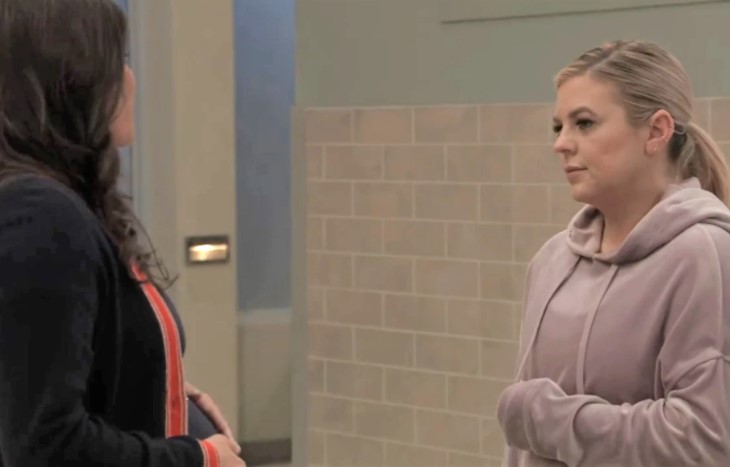 General Hospital (GH) spoilers for Wednesday, April 28, 2021, reveal Brooklyn coming out and asking for what she wants and Britt having a plan to save Jason.

Maxie (Kirsten Storms) can’t imagine what Brook Lynn (Amanda Setton) wants from her and why she arrived at her apartment. Sure, they’re both pregnant (or so Maxie thinks — at first), but not every pregnant woman has something truly in common with the other.

Brook Lynn doesn’t care that Maxie doesn’t want her there. She is ready to reveal all and when Maxie asks “What is that?” we can assume she is talking about BLQ’s fake pregnancy belly.

Brook Lynn goes for what she wants and asks Maxie for her baby. Maxie finds this to be an intriguing prospect and she may have found a place for her baby while she fakes the infant’s death.

Meanwhile, Peter (Wes Ramsey) is quite proud of himself. He nearly killed Chase (Josh Swickard) but at least he got access to Maxie by offering Anna (Finola Hughes) the antidote in exchange for her convincing Maxie to see him.

Peter hisses his accomplishment to Valentin (James Patrick Stuart) and we expect him to soon twirl his mustache because isn’t that what hissing evil villains do? General Hospital spoilers also say that Valentin overhears something adventitious. Does that mean he has something on hissing Peter?

Over at GH, Laura (Genie Francis) confronts Cyrus (Jeff Kober) and asks him if he can use finding his mother as a reason to start fresh in life. She also runs into Elizabeth (Rebecca Herbst) and checks how she’s doing. It’s nice that someone is asking how a recent widow is feeling of late.

In Jason’s room, he and Britt (Kelly Thiebaud) plot to help him escape but Carly (Laura Wright) stops by and wonders if they can trust Britt. She insists to Jason (Steve Burton) that he do things her way. Because she always insists Jason do things her way.

General Hospital Spoilers: Jason And Britt’s Discovery, Bump Into Sonny While On The Run?https://t.co/itwzeEC4xY

Over in Nixon Falls, Nina (Cynthia Watros) and Jax (Ingo Rademacher) have a more civil talk than the one they had last week just before Jax was shot. Jax wonders if Nina is ever coming home and Nina doesn’t have an answer for him.

Stay tuned to General Hospital weekdays to see how these stories play out.

Days Of Our Lives Spoilers (DOOL) Wednesday, April 28: Belle Lashes Out At Sami, Ben Shocks All