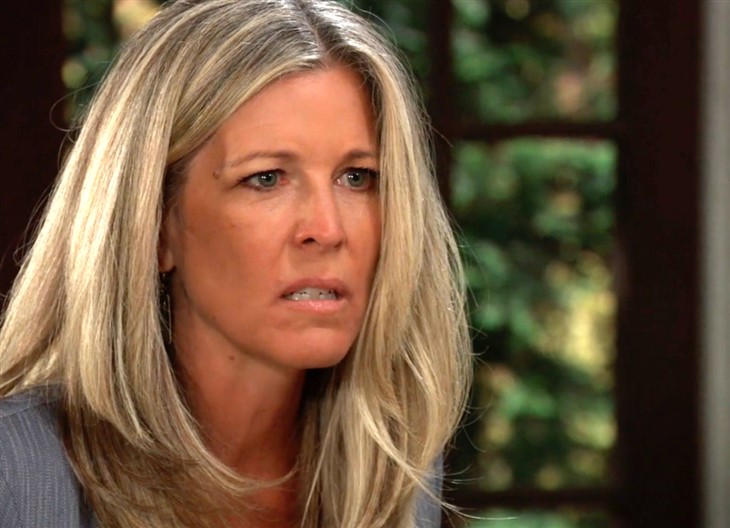 General Hospital (GH) spoilers for Thursday, September 30, 2021, reveal that Carly Corinthos is still the most un-self-aware character on soaps as she plays the enraged victim ready to kill anyone who gets in her way.

It’s Carly’s world and in that world, Carly (Laura Wright) is always right and everyone else is always wrong no matter how many horrible and illegal things she has done to people. Nina Reeves (Cynthia Watros) is now her greatest enemy and she better hope nobody has a recording device because she already threatened to kill Nina and then dance on her grave like any sane and rational person would.

On Thursday, it’s time to give Jax (Ingo Rademacher) a piece of her enraged mind as she tells him to go to hell when he tries to explain why he didn’t immediately tell her that he found Sonny (Maurice Benard) in Nixon Falls. Jax even takes part of the blame, but that’s not good enough for Carly because she is out for blood.

Meanwhile, Jason Morgan (Steve Burton) just wants to keep his kinda-sorta wife calm but it doesn’t look like that’s going to work out so he hangs back at the Q mansion as Ned (Wally Kurth) and Monica Quartermaine (Leslie Charleson) wonder what will happen to him now that Sonny is back.

Young Esme (Avery Pohl) is so glad she found Spencer Cassadine’s (Nicholas Chavez) beloved Uncle Sonny because she knows Spencer needs a good talking to. What will she manipulate Sonny into doing?

Josslyn Jacks (Eden McCoy) might want to know the same thing as she and Esme later have a run-in and Joss tries to put the girl in her place. Over at Wyndemere, Cameron Webber (Will Lipton) is doing his part trying to get Spencer to admit what he and Esme have been up to.

Alexis Davis (Nancy Lee Grahn) spends her time in her luxury prison recapping stories and being everyone’s talk-to. On Thursday, Shawn Butler (Sean Blakemore) stops by for a visit and Alexis doesn’t understand why he’s not giving her an update on the Hayden Barnes (Rebecca Budig) case. However, that’s the least of the news he has for her. Stay tuned to General Hospital weekdays to see how these stories play out.