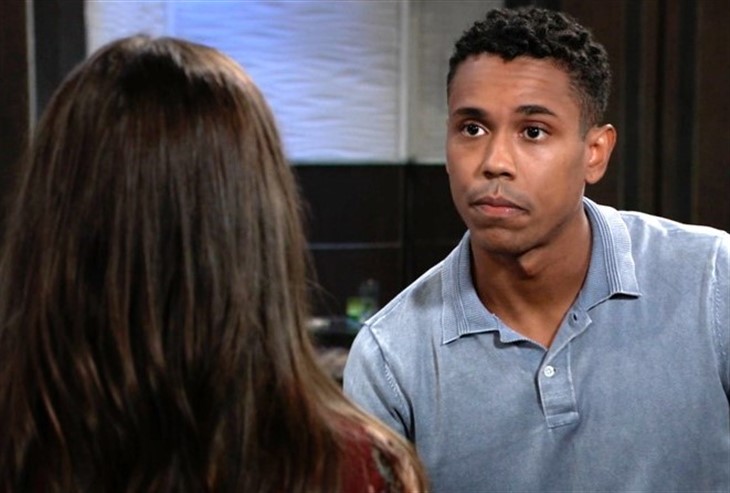 General Hospital (GH) spoilers and rumors tease that TJ Ashford’s (Tajh Bellow) kidnapping and the subsequent revelation that Molly Lansing-Davis (Haley Pullos) slept with Brando Corbin (Johnny Wactor) while he was missing may lead to a profound change in behavior for the young medical student. TJ recently punched Brando at General Hospital after her found out about his tryst with Molly.

GH fans will recall Brando didn’t know TJ at the time, and Molly didn’t even mention TJ to him until after they slept together so it’s not his fault what happened, but that didn’t stop TJ from risking his standing at the hospital by lashing out.

When Cyrus Renault (Jeff Kober) needed leverage against Police Commissioner Jordan Ashford (Brianna Nicole Henry), he had his men kidnap TJ. TJ was missing for several days, but since Molly had just turned down TJ’s marriage proposal, she mistakenly believed that TJ wanted nothing more to do with her. So while Molly dealt with her pain by sleeping with Brando, TJ was beaten by his captors. TJ was eventually released and he and Molly reconciled. But Molly didn’t want for TJ to suffer any more than he already had, so she kept quiet about Brando for several months.

With the secret weighing on her, Molly finally told TJ the truth. TJ was understandably upset, but he still loves Molly and told her they would get through this. But this may not be as easy as he thinks. The fact that TJ lashed out at Brando at TJ’s place of employment seems to indicate that everything is far from ok. TJ’s suffered great trauma during the kidnapping, and although he seemed to bounce back rather quickly, he may not have dealt with his pain, instead just pushing it deep inside.

It’s easy to see a scenario where TJ begins to show signs of a significant change in personality. He could start to believe that he can’t trust Molly out of his sight. If he starts to believe that if Molly cheated once she could do it again. Molly might not notice at first, but it’s possible as time goes, TJ could become possessive and controlling. This would be completely out of character for TJ, but until TJ truly deals with the kidnapping and gets help, his relationship with Molly could certainly be at risk.

General Hospital Wild Speculation: Sonny With Lenny And Phyllis – Are They Taking Care Of Nelle Too? #gh #generalhospitalhttps://t.co/QFUTXeU1CJ

Will TJ and Molly simply be able to put the past year behind them? Or is TJ beginning to show signs that he may not be as ok as he claims? Will his recent trauma bring out TJ’s anger in dangerous and unhealthy ways? Anything can happen in Port Charles so stay tuned to General Hospital, airing weekdays on ABC. And don’t forget to check back right here regularly for all your General Hospital comings and goings news, future episode information and GH spoilers and updates!

Days Of Our Lives (DOOL) Spoilers Next Week: Nicole Excited For Eric’s Return, But She Gets Divorce Papers Instead