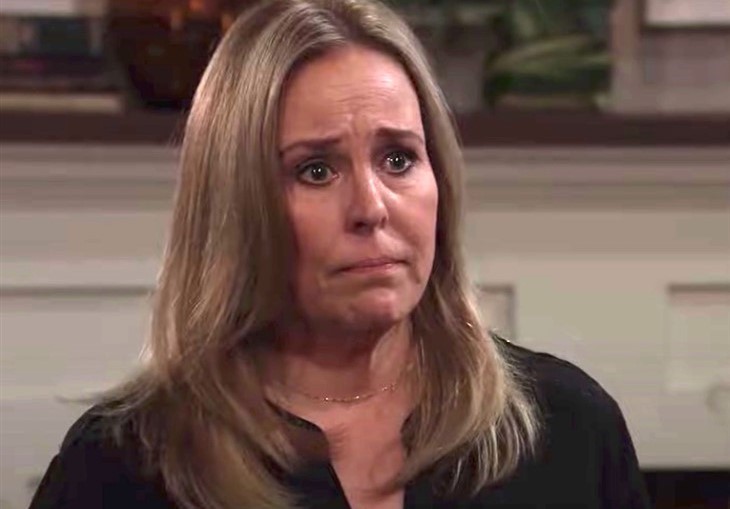 General Hospital (GH) spoilers for the next two weeks tease that feline-like Nina Reeves (Cynthia Watros) keeps toying with mouse Sonny Corinthos (Maurice Benard) but does Michael Corinthos (Chad Duell) hear something that could mean the jig is up? Elsewhere Sam McCall (Kelly Monaco) visits a special someone in jail and later Alexis Davis (Nancy Lee Grahn) gets a friendly greeting from nefarious Nikolas Cassadine (Marcus Coloma). Elsewhere Spencer Cassadine (Nicholas Chavez) is oblivious to the checkmate that could be coming his way.

Meanwhile Ryan Chamberlain (Jon Lindstrom) keeps drooling in his locked in state and fearless and dumb Alexis has some stunning news for his ex Ava Jerome (Maura West).

Will Jordan Ashford (Briana Nicole Henry) leave well enough alone and allow Curtis Ashford (Donnell Turner) and Portia Robinson (Brook Kerr) to tango? Not on your life! Explosive show spoilers reveal that the DA may not handle rejection well, do we sense a major catfight in the wings – meow!

Elsewhere look for Jasper Jacks (Ingo Rademacher) to lose it with his ex and baby mama Carly Corinthos (Laura Wright) when Josslyn Jacks (Eden McCoy) finds herself in the eye of the storm. Will Jason Morgan (Steve Burton) have to throw down with Candy Boy?

Meddling Auntie goes so far as to confront Portia but will the good doc let Stella pull her power play this time around or will she tell the older woman where to go and how to get there?

We’re guessing that Stella finally admits to her bad behavior with Curtis because spoilers indicate that the cool smoothie loses his cool not just with her but with someone else who is vying for his attention.

General Hospital Spoilers – Curtis Ashford Is Popular With The Ladies

The teen scene is heating up with secret alliances and the like, and Trina Robinson (Sydney Mikayla) has a bone to pick with someone. Later she hears what could be TMI from someone near and dear and it could alter her life forever.

Ava Jerome (Maura West) does something that shocks Nikolas nearly into a coma when she offers a former inmate a job. Who is he afraid of and why?

Meanwhile Millow continue to do a slow burn. Michael Quartermaine (Chad Duell) shows some compassion to

Willow Tait (Katelyn MacMullen) and is someone watching, again? Austin Holt (Roger Howarth) plays both ends of the stick with Harrison Chase (Josh Swickard) and we may get a glimmer of the real Austin in this situation.