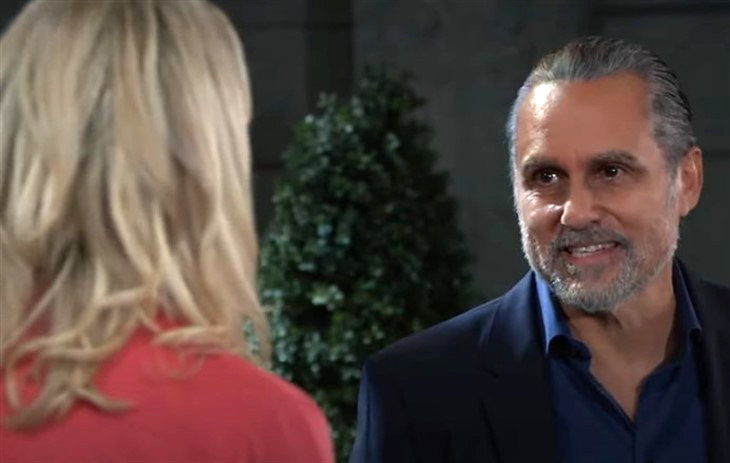 General Hospital (GH) spoilers for Monday, October 25, 2021, reveal Nina Reeves in the hot seat because Michael thinks she committed a crime and bribed a politician from the Pennsylvania side of the river, which is definitely not a crime at all if you are Michael and Carly.

Nina (Cynthia Watros) can’t believe she is being arrested for identity theft especially when she didn’t actually steal anyone’s identity. For some bizarre reason, there’s more amnesia in Port Charles and people can’t seem to remember that Sonny (Maurice Benard) was already gone for months before Nina left for Nixon Falls.

Sonny certainly didn’t want to see this happen and he definitely doesn’t want Carly (Laura Wright) knowing about what happened between him and Nina. That’s why Ava Jerome (Maura West) thinks her friend has leverage. Scott Baldwin (Kin Shriner) might be her attorney, but Ava has all the ideas when she tells Nina to use all the leverage she has to get Sonny to help her.

Meanwhile, Carly tells Michael (Chad Duell) that yep, Nina committed a crime because blowing up and killing people on your wedding day is everyone’s idea of legal. Does anyone want to question her and Jason about the Novaks?

Over in Crete, Anna (Finola Hughes) remains worried sick about Valentin Cassadine (James Patrick Stuart). She knows he needs to return to the States soon for medical treatment and is nervous about his transport. Before he leaves, Anna tells him she is sorry for just dumping him in his room that night thinking he was drunk. She also tries to tell Valentin something else but doesn’t quite manage to get it all out. He certainly wants to hear what she has to say.

Maxie Jones (Kirsten Storms) still can’t believe her new friend Brook Lynn (Amanda Setton) treated her new friend Austin Holt (Roger Howarth) in such a terrible way. Yes, she trusts Brook with her baby but is now not sure if she should. However, when the women hear about Valentin, they are definitely worried. They also worry that Austin might be remembering something about a fateful night…. Stay tuned to General Hospital weekdays to see how these stories play out.

Savannah Chrisley Shares An Uplifting Meme To ‘Everyone Who Is Trying’