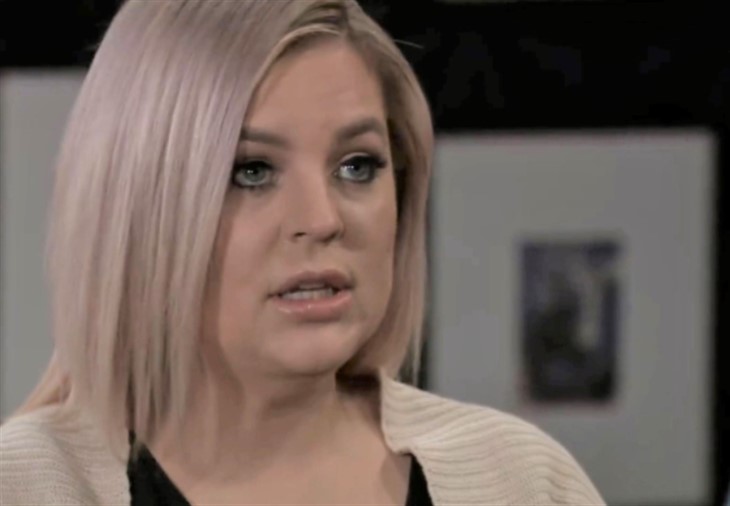 General Hospital (GH) spoilers for Friday, June 11, 2021, reveal Maxie continuing her charade about her baby being kidnapped not realizing how many lives it will affect.

While Dante (Dominic Zamprogna) seemed to think there were holes in Maxie’s (Kirsten Storms) story about how baby Louise went missing, Spinelli (Bradford Anderson) seems ultra-supportive and like he believes every word Maxie is saying. Spoilers say that he helps Maxie with a difficult conversation. Does he tell Georgie that her baby sister is gone?

Maxie seems a little confused about how she wants to approach things with her ex when she asks if they can just call things even and move on. Clearly, she is getting tripped up the more people talk about her story and ask her questions.

Now that Nina (Cynthia Watros) has made a trip back to Port Charles to see Wiley, she learns that her ex-husband Valentin has a daughter. Of course, neither she nor Valentin (James Patrick Stuart) knows that the little girl is actually not his daughter, but seeing Valentin so happy with a baby makes her a tad jealous and wonder what could have been. Wait till she sees that Sasha (Sofia Mattsson) is pregnant, too.

But no matter, she is there to see her grandson, something Willow (Katelyn MacMullen) and Michael (Chad Duell) studiously discuss as they wonder what might go wrong. Michael seems very nervous about this and announces that whatever happens next is up to Nina.

Carly (Laura Wright) also seems to be involved in all this as she confronts Jax (Ingo Rademacher) on ‘encouraging’ Michael to allow Wiley to see Nina. She points out that she knows he’s counting on Nina to stay.

General Hospital Spoilers – Harrison Chase Is In A Bad Place

Finn (Michael Easton) managed to make things better and not worse for Chase (Josh Swickard), thanks to Cyrus (Jeff Kober) making him believe his DNA matched Chase. Now, Finn feels more lost than ever as he searches for a cure, and Chase wonders if he is even going to live.

To that end, he summons Jackie (Kim Delaney) and Gregory (Gregory Harrison) to the hospital and has a heart-to-heart talk with them. Is he ready to say his goodbyes? Stay tuned to General Hospital weekdays to see how these stories play out.