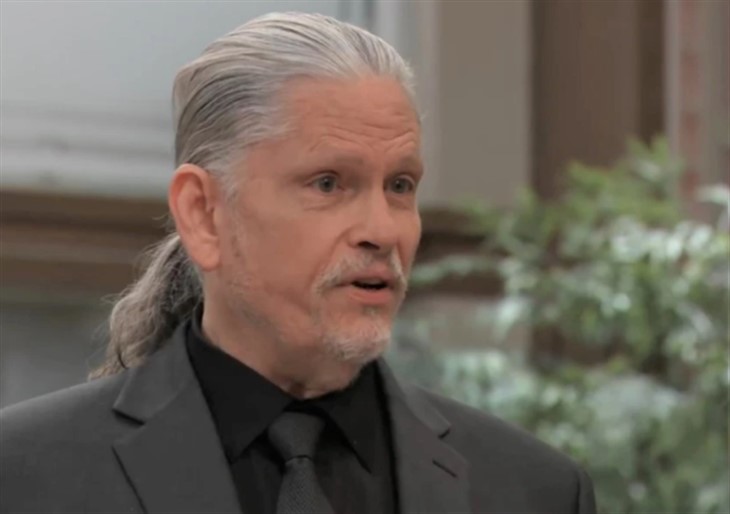 General Hospital (GH) spoilers tease that in Port Charles, NY Cyrus Renault’s (Jeff Kober) is slowly unravelling as his plans continue to face opposition from many Port Charles residents. Cyrus may have thought that with Sonny Corinthos (Maurice Bernard), that the Corinthos family would be easy to take out. Perhaps, that’s why an obviously angry Cyrus opened fire on Jason himself after Jason informed him that he had already killed the sniper Cyrus had planted on a nearly rooftop. This isn’t the first time in recent days that Cyrus has taken matters into his own hands and acted out of emotion.

After giving Sasha Gilmore (Sofia Mattsson) what she thought was simply cocaine, Sasha overdosed and nearly died. Cyrus had ordered that she be dumped somewhere to die, but Brando Corbin (Johnny Waycor) took her to General Hospital. Sasha was saved, but Cyrus couldn’t have Sasha tell anyone where the drugs came from, so he tried to kill her in the hospital but was stopped. The more he acts on his own wishes, the more likely he will slip up. But why now?

GH Spoilers – Mayor Laura Collins Refuses To Have Anything To Do With Cyrus Renault!

Despite just finding out that Cyrus is her half-brother, Mayor Laura Collins (Genie Francis) still wants nothing to with him. This has to sting for Cyrus because his own mother, Florence Gray (Annie Abbott) has similar feelings toward her son. To make matters even worse, Laura is actively working on building a familial relations with Martin Grey (Michael E. Knight), who is also Laura’s recently discovered half brother!

General Hospital Spoilers – Is Cyrus Renault About To Meet With An Untimely End?

With so many people actively trying to take him down, even with Sonny missing, Cyrus is starting to feel the pressure. Continued rejection from Laura, Florence and even Martin is making Cyrus unpredictable and even more dangerous than even. But it also means that Cyrus may make a mistake that Laura can finally use to bring Cyrus down! The only question is will Cyrus return to prison or he will die because of his carelessness?

Is Cyrus becoming more unhinged? Will that make him more dangerous? Will acting on his emotions lead to a return to prison or perhaps in a body bag at the morgue? Emotions are running amok in Port Charles, so stay tuned to General Hospital, airing weekdays on ABC!

And don’t forget to check back right here regularly for all your General Hospital news, information and spoilers!

Eastenders Spoilers: Gray Likely To Kill Again, Who Will Be Murder Victim #3?