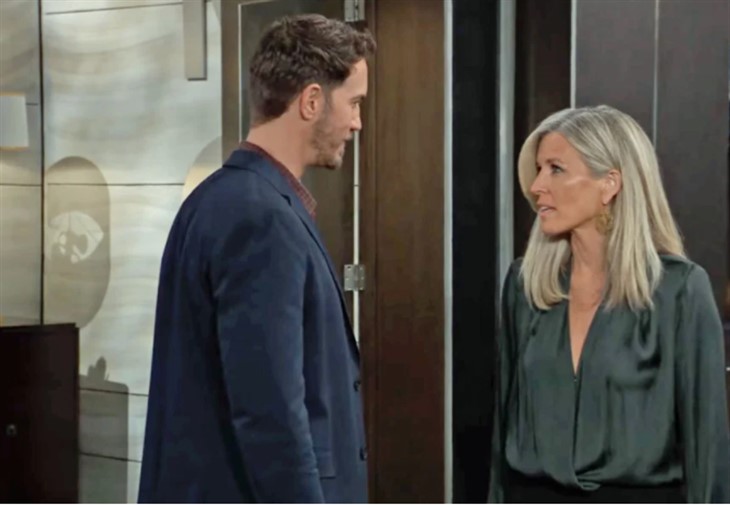 General Hospital (GH) spoilers tease that Carly Corinthos (Laura Wright) makes her presence known to Peter August (Wes Ramsey) in an upcoming episode of General Hospital. But – is she mouthing off to the wrong guy?

Carly Corinthos didn’t care that he didn’t like her plan, it was her way or the highway, and he wound up in General Hospital with a stab wound to the stomach, inflicted by his new cellmate Shawn Butler (Sean Blakemore). That was because Carly called Shawn in prison and apparently arranged for him to be Jason’s new cellmate! Her answer to Jason was, “It got you out of prison, didn’t it?!”

Carly also knows that Peter is behind the murder of Franco Baldwin (Roger Howarth) and Cyrus Renault (Jeff Kober) is behind framing Jason for it, paying Gladys Corbin (Bonnie Burroughs) for her false testimony. General Hospital spoilers and recaps show Peter is the publisher and now, the main reporter for “The Invader” and his offices are upstairs in The Metro Court, which Carly owns along with her partner Olivia Quartermaine (Lisa LoCicero).

Carly could make sure Peter’s evicted from his offices at any time on General Hospital, and she really wouldn’t have to have a reason! Carly could care less about either Peter or Cyrus as far as she could throw them, which wouldn’t be really far! She already has figured out, as Jason has, that Cyrus and Peter are working together, and she and Anna Devane (Finola Hughes) have also been working together after Jason sent Anna to Carly.

While Carly knows that Cyrus and Peter were working together to frame Jason, and figures Cyrus either has something on Peter or Peter has something on Cyrus, she may not realize that their collaboration involves more than the frame-up.

General Hospital viewers know that with everything that Cyrus is holding over Peter, he can pretty much get him to do anything he wants. Cyrus will play the philanthropist and upstanding Port Charles citizen, and because his ego is bigger than the Metro Court and probably the United States itself, he’ll think Peter will be his go-to boy for pretty much anything.

General Hospital viewers know that Cyrus is vastly underestimating Peter, but he’s treating him like he did Julian Jerome (William DeVry) – expendable. Cyrus will do the occasional favor for Peter but he expects Peter to carry most of the weight while he sits back and “supervises!” Carly decides to make her presence known at Peter’s office suite, and she tells him his lease is up and he needs to take his stuff and move elsewhere!

General Hospital spoilers show Carly is really throwing weight around that’s not hers, and when Peter objects that he signed a lease contract and she is mistaken and cannot make him leave, she smugly says “Watch me!” But is Carly mouthing off to the wrong guy? Will Carly find out that Cyrus and Peter’s collaboration goes both ways and Cyrus will do Peter a favor?

The Young And The Restless (Y&R) Spoilers: Sally’s Past Comes Creeping Back To Haunt Her