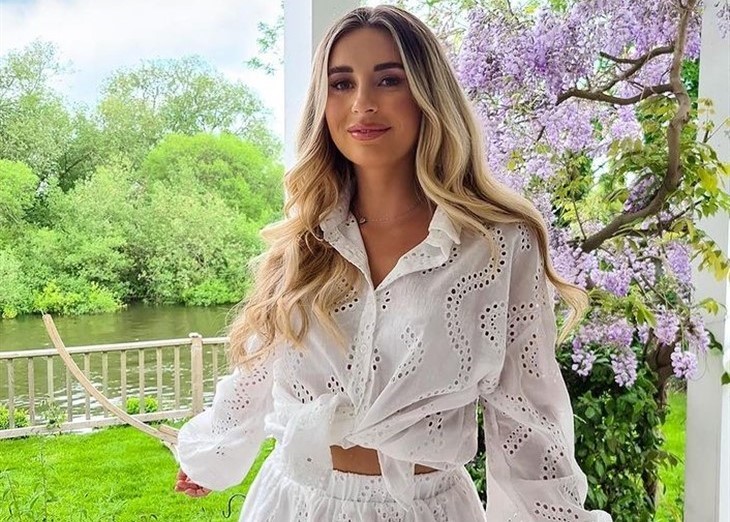 Former “Love Island” champion Dani Dyer has signed up for a cameo in BBC’s “Eastenders.” Dani will share moments on-screen with father Dany in a cab scene next week.

BBC has uploaded sneak peek photos of the episodes which show Dani will portray a pregnant cab driver named Jeannette. Mick Carter (Danny Dyer) is running late for Linda’s baby scan at the hospital when Jeannette arrives to pick him up.

But a twist of fate happens when Jeanette goes into labor as her water breaks while she drives. The photo reveals Mick rushes her to a hospital.

The star had to wear a prosthetic bump for the scene, which made her nostalgic about her pregnancy with her partner Sammy Kimmence for their own son Santiago who the world welcomed earlier this year.

“I absolutely loved being pregnant, so it was mad having a bump back on and it made me miss my bump even more!”

She told Digital Spy that she looked at YouTube first to study how pregnant women act, but after realizing she’s been pregnant, she found the greatest example.

She also acquired a new skill by driving the cab for the set and had to do loads of test runs since she’s not confident of her driving. The star joked around: “I definitely won’t become a cab driver anytime soon!”

Earlier this year, the father-daughter duo chatted about Dani’s decision of joining the ITV2 show in 2018 on their podcast titled “Sorted With The Dyers.”

“EastEnders” legend Danny confessed he was “furious” upon knowing she’s decided to be an islander and offered his child cold shoulders.

“We didn’t really talk. It was very awkward. Oh my god, I’d walk into the room and it would be so awkward,” Dani recalled.

The actor Dany justified he was just upset since the duo is like two peas in a pod yet Dani kept the details from him.

The father admitted that although he was petrified at first he became a viewer with no access to his child and everything turned out well in the end.

Dani is a dental nurse by profession, and although she loved it, it wasn’t something she wanted to be forever.

“I wanted something different, I never took risks and I thought this could be a good one.”

Then the Love Island happened, and she was hailed as the champion together with ex-partner Jack Fincham, where they got to score the £50,000 prize money.