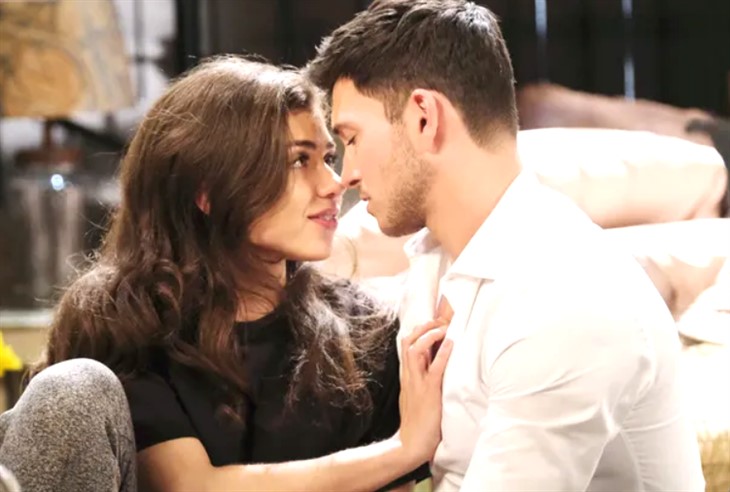 Days of Our Lives spoilers for Friday, September 3, 2021, reveal Ben and Ciara Weston FINALLY going on their honeymoon. It might be a year late, but it looks like it’s still going to be great.

Days Of Our Lives Spoilers – A Day For ‘Cin’ Fans

Ben (Robert Scott Wilson) and Ciara (Victoria Konefal) were supposed to be on a honeymoon last summer, a bomb, but Eve’s (Kassie DePaiva) grief, some brainwashing, and then the grief of Wendy the Midwife’s fiance got in the way. Ciara was thought to be dead, then when she was found alive, she had amnesia, and took off to South Africa with Theo Carver (Cameron Johnson).

When she returned, she had her marriage annulled and prepared to marry Theo but Ben pulled a Bo Brady (Peter Reckell) and kidnapped her from her own wedding. Just a few days alone in the cabin that refuses to burn down and one fortune cookie brought all of Ciara’s memories back so they wed again in Marlena’s (Deidre Hall) living room.

Now, it’s time for the honeymoon so they decide to go camping. There’s lots of romance, but there is also one thing that goes very, very wrong — or right, depending on how you look at it.

EJ (Daniel Feuerriegel) with a new face is as dastardly as EJ with his old face and he is very determined to get his son to listen to him — and get back at Sami (Alison Sweeney). For that, he needs his ex, Nicole Walker (Arianne Zucker) involved. However, Nicole doesn’t want to tell him and balks at his offer. What could he want from her and what does he want to give her in return?

Days Of Our Lives Spoilers – Gwen Rizczech Finally Fesses Up

But what does she tell him? That she lied about Abby (Marci Miller) pushing her down the stairs and a doctor was blackmailing her and died right in the Horton living room and Xander was protecting her? Or does she just mention she is sleeping with Xander and there’s nothing he can do to stop her? Stay tuned to Days of Our Lives weekdays to see how these stories play out.