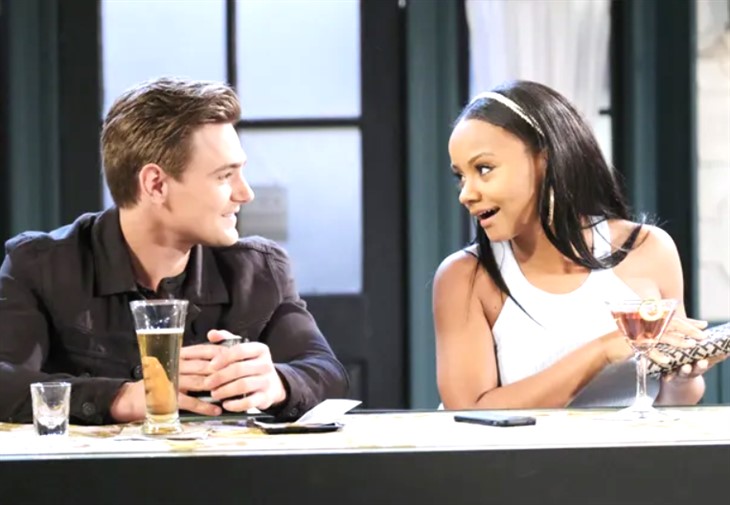 Days of Our Lives (DOOL) spoilers reveal that in Salem EJ DiMera (Dan Feuerriegel) met Chanel Dupree (Raven Bowens). However, EJ didn’t want Johnny DiMera (Carson Boatman) going on a date with her. EJ told Chanel that Johnny already had plans but wouldn’t explain further. Next, EJ pressures Johnny to tell him everything about Chanel, but what is the issue?

DOOL spoilers reveal that on Friday’s episode, Chanel stopped by the DiMera mansion to see Johnny. While there, Chanel introduced herself to EJ. The young woman complimented EJ on his home and mentioned her mother was in real estate.

The reason for Chanel’s visit was to invite Johnny out for drinks with Tripp Johnson (Lucas Adams) and Allie Horton (Lindsay Arnold). Of course, Chanel didn’t give out any names and just referred to them as her BFF and her boyfriend. So, Johnny still has no clue about Chanel’s connection to Allie.

Johnny thought it sounded great but EJ intercepted. He claimed that Johnny would not be able to go because he already had plans. Johnny was confused because he had no other plans. Of course, EJ did this for a reason but isn’t going to say anything in front of Chanel. EJ literally just met Chanel moments before so he knows very little about her. However, there must be a reason why he doesn’t want Johnny getting any closer to his new love interest.

Days of Our Lives spoilers for the week of August 30 reveal that EJ grills Johnny about Chanel. EJ doesn’t seem to know anything about her, certainly not enough to warrant him intercepting their plans. So, what exactly is EJ’s problem and why does he grill Johnny about Chanel?

There are a lot of possibilities with this storyline. Perhaps EJ remembers Allie mentioning Chanel and wonders if it’s the same girl. He might not have liked Chanel’s comment about the moat and may wonder if she’s a gold digger. The last name Dupree might ring a bell to EJ, but he can’t put his finger on it. Of course, there is always the chance that Johnny and Chanel could be secretly related since that’s a common theme in Salem. EJ might think that he can use Chanel as a way to force Johnny into giving up his movie-making ambitions.

What we do know is that EJ is unsuccessful in keeping Johnny and Chanel apart. EJ turns to Nicole Walker (Arianne Zucker) for help. It’s possible that EJ wants Nicole to intervene. If Nicole can get Allie and Chanel together, then EJ thinks Johnny’s “problem” will be solved. However, nothing is ever that simple in Salem and Nicole is going to want the whole truth — but will she get it out of EJ?