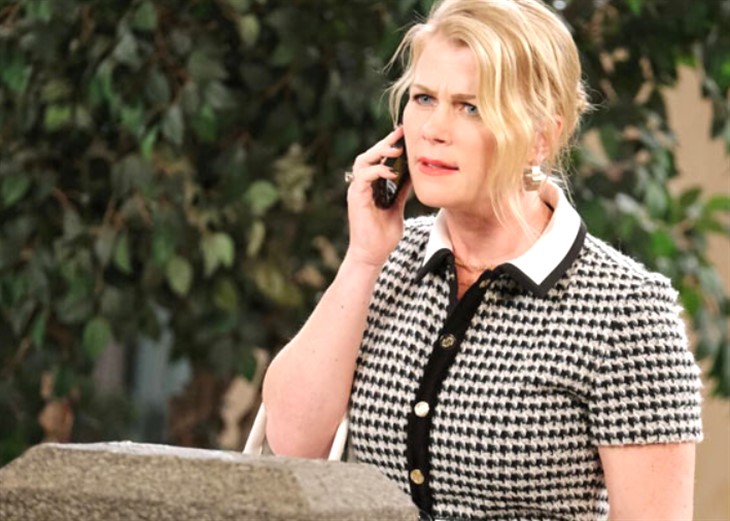 Days of our Lives (DOOL) spoilers tease that the next two weeks will be a roller-coaster ride full of action in Salem. For starters, Philip Kiriakis (Jay Kenneth Johnson) asks Chloe Lane (Nadia Bjorlin) out and Victor Kiriakis (John Aniston) will betray someone. Next up, look for someone to scandalize Salem and it has to do with missing mama Sami Brady DiMera (Alison Sweeney).

Days Of Our Lives Next Two Weeks Full Of Salem Action

During the week of September 13-17 fans of Justin Kiriakis (Wally Kurth) and Bonnie Lockhart (Judi Evans) have something to celebrate—could it be that Justin still loves Bonnie despite her antics?
Believe it or not, Steve Johnson (Stephen Nichols) of all people advocates for Justin and Bonnie to reunite. How can they do this with her in jail? They can if he is her lawyer!

Bonnie comes clean with the legal eagle and he is so impressed he could order up a little jailhouse marriage certificate.

Elsewhere on NBC Days of Our Lives soap, look for Johnny DiMera (Carson Boatman) to score in the movie department. He’s been itching to get funding for his project and he shocks by revealing that his mom Sami is his muse. This takes us back to 2014 when Sami moved to Hollywood to make a movie and now Johnny will try to make it happen.

DOOL spoilers – A Star is Born

Look for Sami’s mom Marlena Evans (Deidre Hall) to have a vintage sex-filled flashback in the name of the movie making! Is this a trashy documentary or what?!

At the same time Johnny involves Lucas Horton (Bryan Dattilo) in the flick much to the amazement of his dad EJ DiMera (Dan Feurriegel).

Spoiler alert: Explosive DOOL spoilers reveal that Marlena will be possessed again in the near future, will this be a part of Giovanni’s film, too?

The following week, Days of Our Lives spoilers show that Victor and Brady Black (Eric Martsolf) conspire and it could be Philip who is the victim, and out of a job.

Meanwhile Doug Williams (Bill Hayes) is not well. Does he have dementia? It sure seems like it, and spoilers reveal that he will have a sudden downward spiral. Kayla Johnson (Mary Beth Evans) shocks Julie Williams (Susan Seaforth Hayes) with the test results and nothing will ever be the same again.