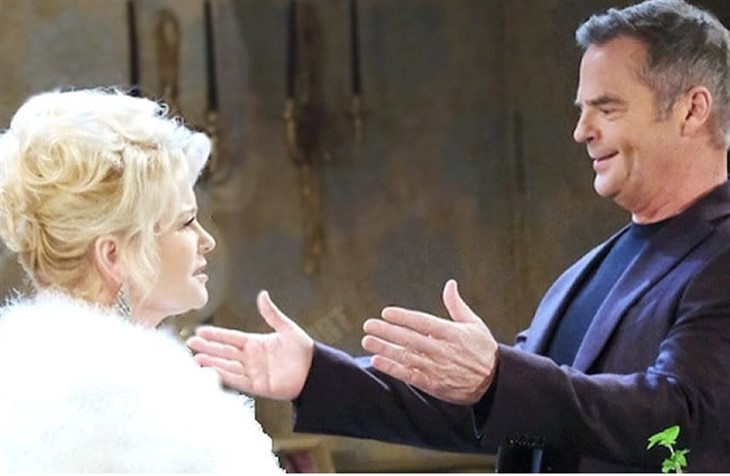 Days of Our Lives Spoilers tease that Justin Kiriakis (Wally Kurth) never thought he would find love again after the death of Adrienne Kiriakis (Judi Evans). But not only has he found love, he found it with Adrienne’s lookalike, Bonnie Lockhart (also Judi Evans). But Bonnie’s past has caught up with her, and she is currently under arrest for murder.

According to DOOL spoilers, Justin is doing everything he can, but he may have to say goodbye to Bonnie in the very near future. Justin himself has put his own integrity on the line in order to save Bonnie, with disastrous results. In fact, Justin entire reputation may never recover.

Days of Our Lives Spoilers – Justin Kiriakis Tried To Blackmail A Judge!

In order to save Bonnie from a crime she didn’t commit, Justin put his own career on the line by trying to blackmail a judge. This move also succeeded in landing Justin in jail as well. It looks like Justin will be saved by Victor Kiriakis (John Aniston). But that will still leave Bonnie in jail, awaiting trial. If things don’t go well, Justin may have to say goodbye to Bonnie.

When Adrienne died, Justin was lost on Days of Our Lives. For awhile, he got involved with Dr. Kayla Johnson (Mary Beth Evans), but when Steve Johnson came back to town, Kayla couldn’t deny her love for Steve. That’s when Bonnie came back into their his life. Justin was wary of Bonnie because she had caused his wife so much grief in the past. But eventually Justin found himself in love.

Days Of Our Lives Spoilers – Will Bonnie Lockhart End Up In Jail!

If Bonnie does go to jail, it may just feel to Justin like he is losing Adrienne all over again. Look for an emotional goodbye. Justin was in bad shape after losing Adrienne, he may not get over losing Bonnie so easily. Hopefully, something will happen and Bonnie and Justin can get a second chance at love!

Will Justin and Bonnie get a second chance at love? Can Bonnie escape the charges levelled against her? Will Justin’s reputation remain intact? Literally anything can happen in Salem, so stay tuned to Days of Our Lives airing weekdays on NBC. And don’t forget to check back right here regularly for all your Days of Our Lives news, information and spoilers!