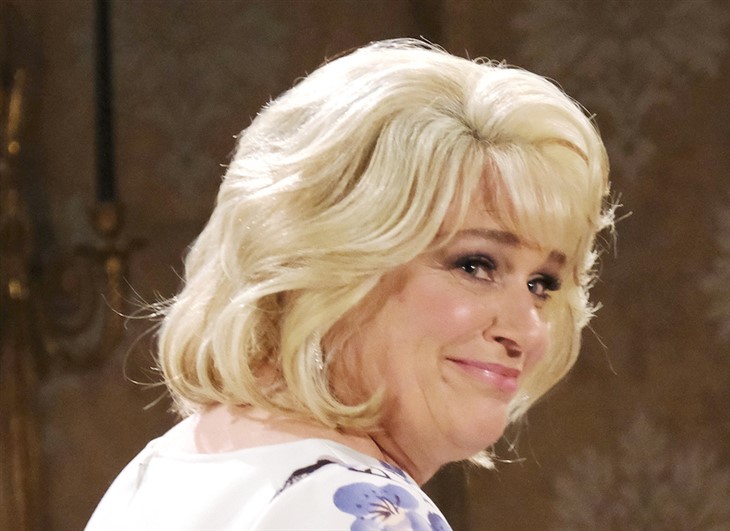 Days of Our Lives (DOOL) spoilers for Monday, September 7, 2021, reveal in Salem Bonnie in big trouble on the day of her dream wedding and she isn’t sure what to do.

Days Of Our Lives Spoilers – Bonnie Lockhart Pulls Off A Caper

Bonnie (Judi Evans) is desperate to make sure that Calista (Cady Huffman) doesn’t reveal any of her deep, dark, allegedly-murderous secrets before her dream wedding to Justin Kiriakis (Wally Kurth) so she does what she has to in order to get the cash to pay her sister-in-law off. She steals the money from Xander’s (Paul Telfer) hotel room and on Tuesday, he figures it out.

Xander is going to go ballistic because he finally struck it rich after trying to get good cash for so many months. How will Bonnie get herself out of this mess? She might not be able to because another mess is on its way.

Bonnie Lockhart has no idea as Xander demands the money she stole and Calista demands the same money, as a blackmail payoff. This was supposed to be the day Bonnie had waited for forever. She was going to marry Justin Kiriakis and he loved her for her and not just because she is the spitting image of Adrienne.

All of her dreams were about to come true, and then this long-lost sister-in-law shows up in Salem to ruin everything. Will Justin start to suspect something is very wrong with his bride? This was supposed to be a happy day for him, too, but things might not work out as planned.

Julie Williams (Susan Seaforth Hayes) has had a day to remember that she may like to forget considering she ended up locked in her own freezer. Julie is also quite worried about her husband, Doug (Bill Hayes), and she might have a very good reason.

He hasn’t been acting like himself lately and doesn’t seem to be in the right mental state. Roman Brady (Josh Taylor) also notices the problem so Julie now knows she isn’t crazy and imagining any problems. Will they be able to get Doug the help he needs before it’s too late? Stay tuned to Days of Our Lives weekdays to see how these stories play out.

Days Of Our Lives: Beyond Salem Spoilers: Paulina In Trouble…And So Is Will Horton