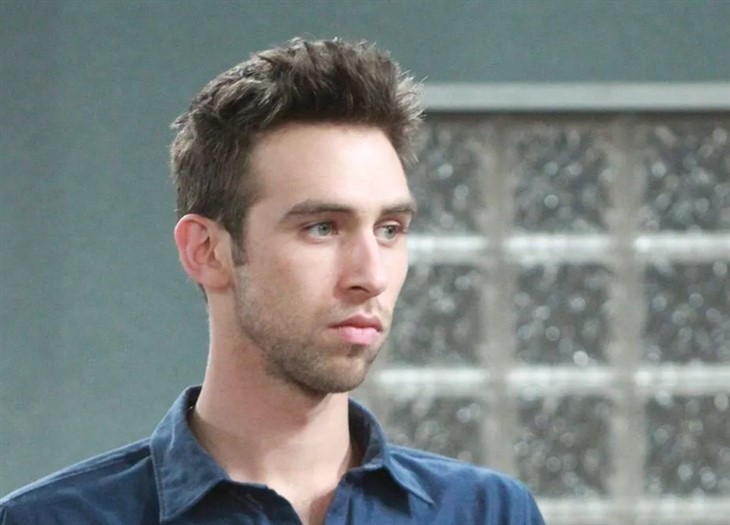 Days of Our Lives (DOOL) spoilers tease that the twice murdered Nick Fallon (Blake Berris) has appeared quite a bit within the Salem universe. First, Dr. Marlena Evans (Deidre Hall), while possessed by the devil, reanimated Nick to cause trouble for Gabi Hernandez (Camilla Banus) and her current love, Jake DiMera (Brandon Barash).

Gabi actually killed Nick twice, although the first time he wasn’t as dead as he seemed. But when he resurfaced alive and well, she made sure that Nick was gone for good. And he would have been, had the devil not wanted to cause some Halloween Chaos. Nick buried Jake alive and Gabi had to dig him out. Jake survived and Gabi once again made sure Nick returned to his grave!

DOOL Spoilers – Will Horton Wrote Nick Fallon As A Good guy In His Christmas Movie Script!

Will Horton (Chandler Massey) actually wrote Nick as a good guy in his Christmas movie script. In the story, Nick was in love with his best friend Gabi, but she only had eyes for Brady Black (Eric Martsolf). But in the end Gabi finally realized Nick was the perfect guy for her and they fell in love.

Days Of Our Lives Spoilers – Does Nick Fallon Have A Lookalike Relative?

It’s possible that Nick may have a brother or other Horton relative who looks just like him since Nick was definitely dead and sent back to hell on Halloween. But maybe Nick’s lookalike, if he has one, can come to Salem and win Gabi’s heart from Jake. Gabi would certainly be afraid at first, given the ways that Nick tormented her over the years. But once she realizes that Nick’s lookalike is nothing like Nick, perhaps she will fall in love just the alternate version of her did in Will’s script! But Salem has had a lot of lookalikes over the years, would this be one too many?

Would you like to see Blake Berris return to Days of Our Lives, perhaps as relative of Nick’s? Or have you seen enough to not want him back at all? Does Gabi really love Jake or is she just waiting for someone to sweep her off her feet? Anything can happen in Salem so stay tuned to Days of Our Lives airing weekdays on NBC. And don’t forget to check back right here regularly for all your Days of Our Lives news, information and spoilers!

Days Of Our Lives Spoilers: Chanel And Johnny Have Massive News To Share