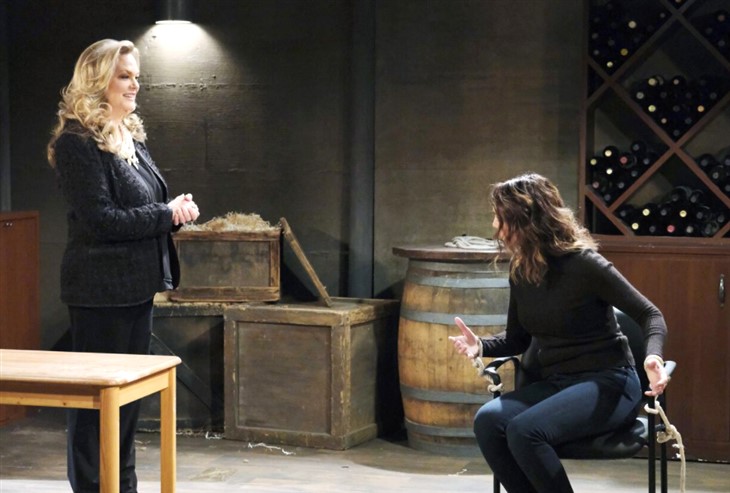 Days Of Our Lives – Anna DiMera (Leann Hunley) makes a discovery while in the DiMera tunnels for some bubbly. Don’t expect her to help Gwen Rizczech (Emily O’Brien), though. Also, Belle Brady (Martha Madison) makes a discovery, Chad (Billy Flynn) is suspicious, and Ava Vitali (Tamara Braun) gets some happiness.

DOOL spoilers reveal that on Friday, we saw Anna go down into the DiMera tunnels to get some bubbly for her boozy lunch date. However, she didn’t find what she was looking for. Instead, she came across a tied-up Gwen! She will make a decision on what to do with the devious schemer who hurt Abigail DiMera (Marci Miller). Here’s a hint, don’t expect her to release Gwen. In fact, it will be just the opposite!

Meanwhile, Chad will become suspicious of Abigail and Gabi Hernandez (Camila Banus) being spotted together. The two were best friends as teenagers, but that quickly went out the window when Gabi went after Chad. Of course, in Gabi’s defense, Abigail faked her death. Since then, the rivalry between the two women has involved everything under the sun. So, the fact that they seem to be on semi-civil terms is raising a red flag with everyone in Salem, including Abigail’s own husband.

Days of Our Lives spoilers for Monday, March 8 reveal that Sami Brady (Alison Sweeney) called Belle for help when Rafe Hernandez (Galen Gering) hauled her into the station. On Monday, Belle will find out that Sami lied to her. We aren’t sure about what, but it must have something to do with Charlie Dale’s (Mike Manning) murder. We are thinking that she either lied about what she was doing in Charlie’s apartment or what brought her back to Salem. We are pretty sure Sami is covering for someone, but it might not be who you think.

Meanwhile, Ava Vitali will get some baby joy. We don’t see Allie Horton (Lindsay Arnold) bringing Henry Horton (Jayna and Kinsley Fox) to Ava on her own due to the whole attempted murder of the family jewels situation. However, she is getting close to Tripp Dalton (Lucas Adams). He has a soft spot for his mother, so he probably encourages Allie to let Ava meet her grandson. It will make Ava emotional and we have to wonder if they are really going to redeem the villain. It certainly seems so, but will fans buy it? We will have to keep watching the NBC soap to find out!