Days Of Our Lives Spoilers: Marlena’s Children Come Together To Save Her Soul 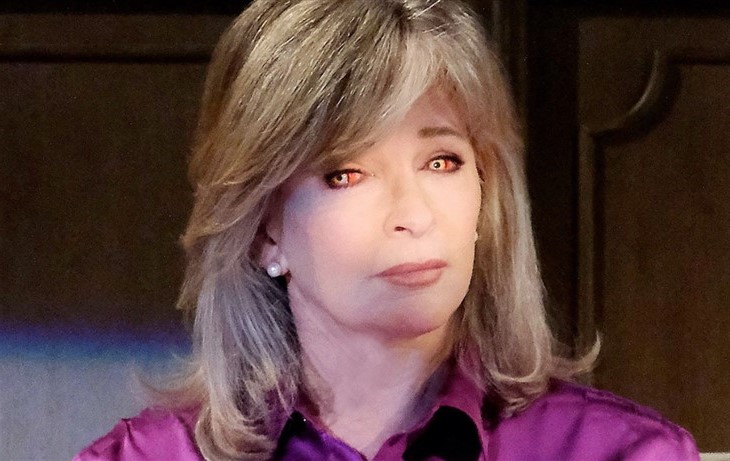 Days of Our Lives (DOOL) spoilers for Tuesday, December 28, 2021, reveal Eric Brady’s return to Salem for a very specific reason. He is ready to exorcise Satan from his mother.

Days Of Our Lives Spoilers – Will Eric Brady Save Them All?

When John Black (Drake Hogestyn) opened his front door to find Eric Brady (Greg Vaughan) standing there, it was certainly a sight for sore eyes on Monday. He then welcomes him in with open arms on Tuesday. After all, MarDevil (Deidre Hall) is chained to the bed in the other room and it’s been decades and decades since Jon was a priest, but Eric was a priest much more recently. Might he be a priest again and legitimately able to put that collar on to save his mother?

That’s what everyone hopes as his twin, Sami Brady (Alison Sweeney), is freaking out, and their sister, Belle Black Brady (Martha Madison), can’t believe that their mother made another version of her via Jan Spears (Heather Lindell) — and she slept with Shawn-Douglas (Brandon Beemer) on Christmas Eve. Allie Horton (Lindsay Arnold) and Johnny DiMera (Caron Boatman) are also there for their grandmother, but MarDevil thinks she has her ticket out and that’s Lucas Horton (Bryan R. Dattilo).

MarDevil has Lucas right where she wants him because she knows his latest deepest and darkest secret — the fact that he is the one who had Sami kidnapped and paid someone to keep her hostage in Wisconsin for months on end.

As MarDevil works on Lucas trying to convince him to set her free, Marlena Evans’ family attempts to use the power of love to bring her back to them for the new year. Will it work or will Lucas manage to screw up the whole thing?

DOOL Spoilers – From Satan To Romance

Speaking of love, DOOL gets even more back to the basics than devil possession when it features some time between one of its most popular pairs ever. Steve (Stephen Nichols) and Kayla Johnson (Mary Beth Evans) had quite a Christmas Eve when the devil knocked her out and freed Jan Spears from her coma. And the devil did this in the form of Steve. Kayla couldn’t even believe it was really him, but then he rescued her and she came to see the truth.

On Tuesday, Steve and Kayla steal themselves away for a romantic time together, which may seem odd combined with all the exorcism nonsense in the Black home. Stay tuned to Days of Our Lives weekdays to see how these stories play out.