Days Of Our Lives Spoilers: MarDevil Resurrects Another Villain…Sort Of 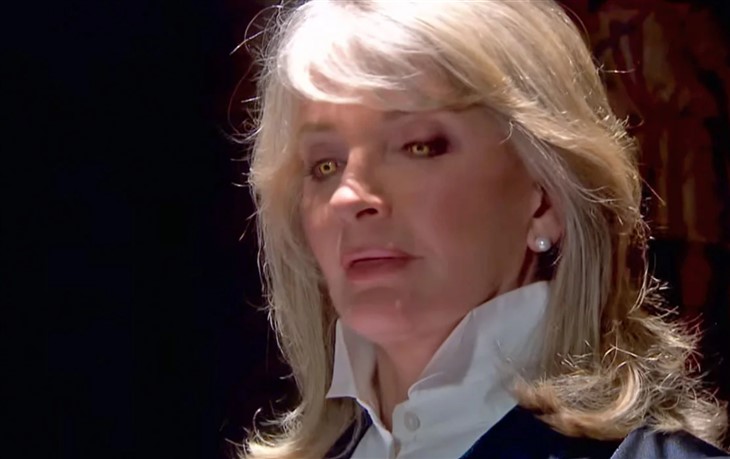 Days of Our Lives (DOOL) spoilers for Monday, December 20, 2021, reveal MarDevil using her magic powers to bring more evil crazy to Salem — in her quest to destroy Belle’s life.

Days of Our Lives Spoilers – MarDevil Has A Brand-New Target

MarDevil (Deidre Hall) has a new enemy and a new target and it’s the woman who briefly knocked her out cold by clocking her on the head. It’s also the daughter of the devil’s host body. Yes, MarDevil is after Belle (Martha Madison) now and seems to have a one-track mind. And what better way to do that than to get Belle’s worst enemy involved.

Jan Spears (Heather Lindell), the woman who lapses in and out of comas like it’s her career, is in a coma once again and MarDevil decides to use her powers to get her out of that coma. Jan and MarDevil teaming up might be a dream come true for fans who want to see some true campy high drama they can have fun with, but it might be Belle’s — and Salem’s — absolute worst nightmare. Just imagine the trouble they can cause together.

However, it looks like MarDevil might leave some collateral damage in her wake as she revives Jan from her coma. First, she has to get through Dr. Kayla Johnson (Mary Beth Evans), the woman who declared herself a Cradle Catholic on Thanksgiving. When Steve Johnson (Stephen Nichols) finds Kayla unconscious, we wonder what the devil did.

DOOL Spoilers – What Will Kate Roberts Do Now?

Against her better judgment, Kate Roberts (Lauren Koslow) declared her son, Philip Kiriakis (Jay Kenneth Johnson), dead in order to further the investigation into what happened to him. That resulted in Brady Black’s (Eric Martsolf) almost-immediate arrest. And that is just the way Philip wanted it as he revealed himself alive and well to Kate soon after.

Now, Kate has a decision to make. Does she allow Brady to stay in jail for murdering someone who is alive and in front of her face or does she go along with her son’s plans?

Meanwhile, at least Brady has cheerleaders as Chloe Lane (Nadia Bjorlin) stays by his side and Belle offers Shawn (Brandon Beemer) a theory on what really happened to Philip. Belle just knows her brother is being set up. Stay tuned to Days of Our Lives weekdays to see how these stories play out.