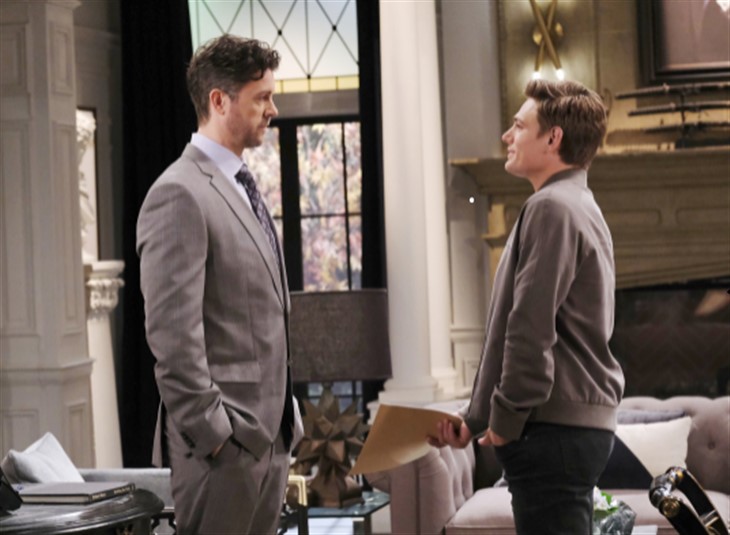 Days of Our Lives spoilers reveal that Johnny DiMera (Carson Boatman) returns from Italy a married man. Johnny thinks that his parents will be happy or at the very least, supportive. However, EJ DiMera (Dan Feuerriegel) insults Chanel Dupree-DiMera (Raven Bowens) to her face. EJ and Sami DiMera (Alison Sweeney) cross the line and Johnny has a strong reaction. Could Johnny be so angry with “Ejami” that he disowns them?

DOOL spoilers reveal that Johnny took Chanel to Italy where he wined and dined her. The couple finally returns from their trip and tells everyone how amazing it was. Then, Johnny and Chanel announce they have some exciting news to share. Johnny says that he and Chanel got married while they were in Italy. Understandably, Johnny and Chanel’s parents are not as happy as the couple expected them to be.

Everyone tells Johnny and Chanel that getting married was a terrible idea. EJ is especially furious about the news. EJ and Johnny already have existing tension, but the CEO makes it even worse by insulting Chanel to her face. EJ also tells Johnny that he can have the marriage annulled.

Days of Our Lives spoilers reveal that Johnny must have expected an extreme reaction from his father. However, Johnny probably thought that his mother would be more supportive. It seems that Sami sides with EJ on this issue. However, Johnny has no intention of getting a divorce or annulment. Johnny and Chanel are in love, which they both make very clear to EJ, Sami and Paulina Price (Jackée Harry).

“EJ and Sami are basically implying that they don’t think it’s a very good idea and EJ even goes on to say that it’s not too late to get it annulled. He feels EJ crossed the line insulting the woman Johnny loves right in front of her. So Johnny has it out with both EJ and Sami.”

EJ and Sami are both strong-willed characters, so it’s only natural that their son is as well. Johnny will dig his heels in on this one and could go as far as to disown his parents until they learn to accept the marriage.

However, don’t expect things to be easy for Johnny and Chanel. They might be in love, but it takes more than that to actually have a successful relationship. Plus, everything gets a lot more complicated when nobody supports the marriage. Will Johnny and Chanel beat the odds or could they regret the decision to get married?