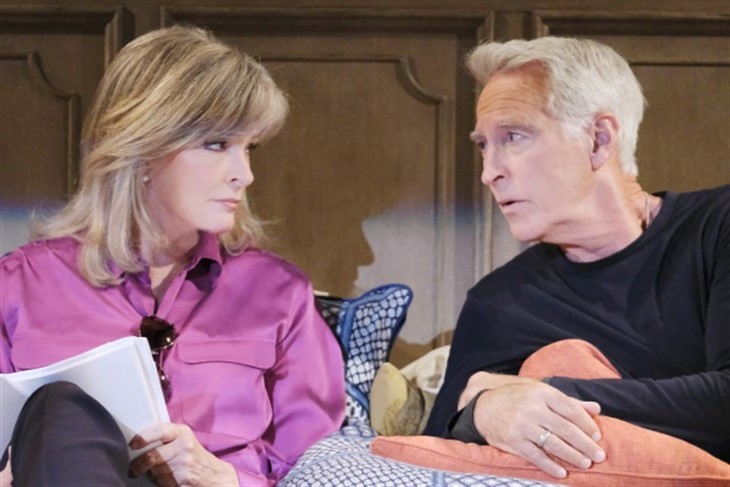 Days of Our Lives spoilers for the week of October 25 reveal that John Black (Drake Hogestyn) confronts Marlena Evans (Deidre Hall). When John enters St. Luke’s Catholic Church, it’s not Marlena that he ends up encountering. Instead, it is “MarDevil,” who is fed up with John’s questions, snooping around and interference.

Days Of Our Lives Spoilers – Doug Williams The Access Point

DOOL spoilers reveal that the first time Marlena was possessed, she was beaten down and vulnerable. Sami DiMera (Alison Sweeney) caught Marlena with the local priest. Marlena became a pariah in the community, Roman Brady (Josh Taylor) filed for divorce and it was an extremely low point for the psychiatrist. Before the possession happened, Marlena had also been drugged by Stefano DiMera (Joseph Mascolo). So, all of these events combined, along with Marlena being ostracized gave the devil an opening.

Even though it’s been 27 years, the devil was just lurking and waiting for another opening. Marlena has been through a lot over the years, but she apparently never let her guard down spiritually. At least, until the devil used Doug Williams (Bill Hayes) to force Marlena to give in.

John has noticed that Marlena just isn’t herself lately. John brushed it off in the beginning as Marlena feeling guilty about Doug’s condition. John also wondered if Marlena could have something medically wrong with her. However, that all changed when Marlena’s odd behavior escalated.

John discovered that Marlena is the one who extended Doug’s visitor and communication ban at Bayview. Then, she gleefully urged Johnny DiMera (Carson Boatman) to make the possession movie. Marlena is also getting snappy with John, and then there were the sunglasses.

Days of Our Lives spoilers for the week of October 25 reveal that John will confront “MarDevil.” It happens at St. Luke’s Catholic Church and it seems that Satan has been waiting for John. The devil doesn’t consider John to be a threat. However, the evil entity does think John is becoming a problem.

Spiritual warfare is teased to begin, but don’t expect it to be resolved anytime soon. The possession storyline will last through Christmas. The devil doesn’t kill John, but instead stashes him in the DiMera dungeon. How long will John remain a prisoner until he can escape or be rescued? While John is held hostage, how much damage does Satan do before Marlena is saved?

What do you think is going to happen when John battles with the devil at St. Luke’s Catholic Church? Why does “MarDevil” take John to the DiMera dungeon, and how will he get out of his predicament? What will a possessed Marlena do next?

Y&R Spoilers: Doug Davidson Shares His Bewilderment Over His Neglect By The Network