Days Of Our Lives Spoilers: EJ Determined To Get What He Wants 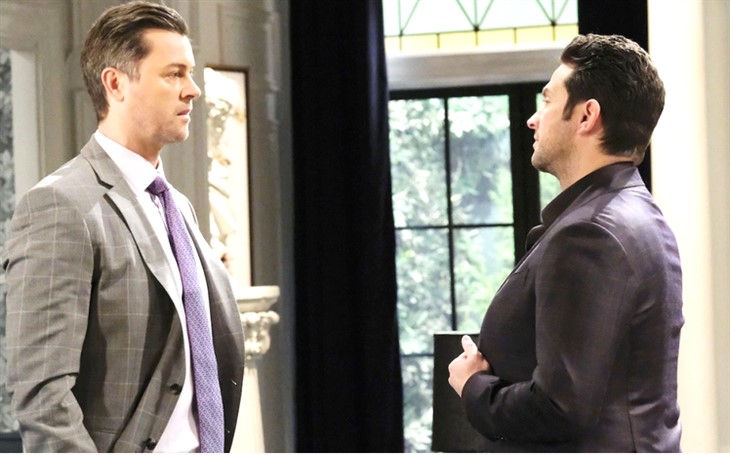 Days of our Lives (DOOL) spoilers and updates tease EJ DiMera (Daniel Feuerriegel) is a man who gets what he wants. EJ came back to Salem and was able to take back control of his family’s company DiMera Enterprises. EJ was able to get his brother Jake DiMera (Brandon Barash) removed from the Chief Executive Officer position. EJ is sharing the position of CEO with his other brother Chad DeMera (Billy Flynn).

EJ found out that his wife Sami Brady DiMera (Alison Sweeney) was having an affair with her former husband and love Lucas Horton (Bryan Dattilo). EJ was furious and told Sami to leave. EJ does not know that Sami has been kidnapped. EJ believes that Sami has left Salem on her own. EJ was happy when his son Johnny DiMera (Carson Boatman) returned home.

Johnny returned to Salem with a dream. He wants to become a filmmaker. Johnny had wanted to get EJ to invest in his movie project. EJ did not want to help Johnny because he wants him to join him and work with him at DiMera Enterprises. Johnny has refused to work with EJ because he is determined to make his movie. Johnny has tried to get Anna DiMera (Leann Hunley) and Tony DiMera (Thaao Penghlis) to invest in his movie but they turned him down. EJ has tried to get Chad and Nicole Walker (Arianne Zucker) to help him to get Johnny to give up his desire to make his movie and work with him at DiMera Enterprises. EJ has needed help from Nicole to deal with another one of his problems.

EJ has been trying to get Xander Kiriakis (Paul Telfer) to give him back one million dollars. Xander got the million dollars from Sami in order to help her break up Nicole’s marriage to Eric Brady (Greg Vaughan). Xander was able to break up Nicole and Eric because he and Nicole had a one-night stand. EJ found out that Sami gave Xander the money and wants it back. EJ is a wealthy man but it is the principle of the issue that is driving him want the million dollars back. Xander wants to give the money back to be able to continue to work for Nicole at her company Basic Black.

EJ got Nicole to give him a contract for Xander but then he could not get his money back. Xander had been robbed by Bonnie Lockhart (Judi Evans) who needed the money to pay off her sister-in-law Calista Lockhart (Cady Huffman). Xander is having trouble getting the money because Bonnie has been arrested for stealing the money and killing Calista. EJ is not happy with this development and tore up the contract that he had for Xander.

Days of our Lives EJ is not going to wait to get what he believes he should have. EJ has been trying to get people to turn down Johnny when he wants to get funds for his movie. What will EJ do to stop Johnny from getting the money to make his movie? Johnny may be able to find someone who will give him the money he needs. Will EJ find a way to sabotage Johnny’s movie? EJ expects Xander to find a way to get him his money. Will EJ do something to Xander in order to get his money back? EJ was helping Xander because he had been having legal trouble. Will EJ get Xander in trouble with the law if Xander cannot get the money? Be sure to catch up on everything happening with DOOL right now. Come back here often for Days of Our Lives spoilers, news, and updates.