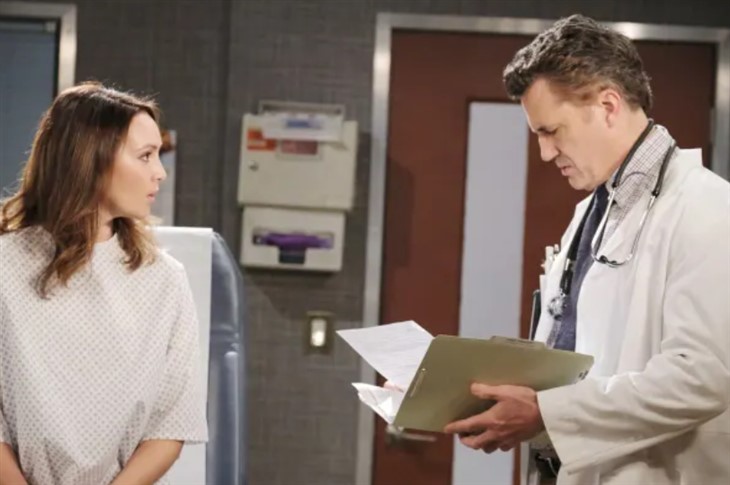 Days of Our Lives spoilers reveal that Xander Cook (Paul Telfer) threatened Dr. Snyder (Michael Lowry). There will be consequences to that as Gwen Rizczech (Emily O’Brien) promises to take care of it. However, Dr. Snyder feels that Gwen is too much of a liability and more trouble than she’s worth. He sets out to get rid of her, but it is teased that Xander saves her life.

DOOL spoilers reveal that Xander overhears Gwen talking on the phone to Dr. Snyder. So, he decides to take action to try and help solve her problem. He’s not interested in helping her but is doing it to protect Jack Deveraux (Matthew Ashford). So, Xander goes up to Salem University Hospital and poses as a patient. When Dr. Snyder comes in and tries to figure out the problem, that is when Xander goes full villain and with that Cheshire cat grin, threatens the man. He tells the doctor that it would be in his best interest to leave Gwen alone.

Dr. Snyder won’t take kindly to being threatened. In fact, he calls Gwen and demands an explanation. She tries to do damage control by telling her she’ll take care of it. However, it is likely that he will view Gwen as a liability. If she told one person about their agreement, then others could find out. He’s not going to want to take that risk. So, he might think it’s better to just get rid of Gwen as she’s more trouble than she’s worth. It is hinted that Dr. Snyder could attack Gwen, or at the very least, try to.

Days of Our Lives spoilers from the new issue of Soap Opera Digest state that Xander protects Gwen from Dr. Snyder. So, something happens this week that requires Xander to go beyond just threatening Gwen.

From the summer promo, we know that Xander and Gwen end up having a passionate love affair. We also know from the SOD summer preview that head writer Ron Carlivati teased what comes next. The scribe said that Gwen doesn’t want to have to rely on Xander, but she actually does need his help.

It is confirmed that a body is found in the lake. It is most likely Dr. Snyder’s and perhaps Xander ends up killing the man. If so, Xander and Gwen will be keeping a killer secret. However, no secret stays buried forever in Salem. At some point, the truth will come out. When it does, how will Xander and Gwen get out of this mess?