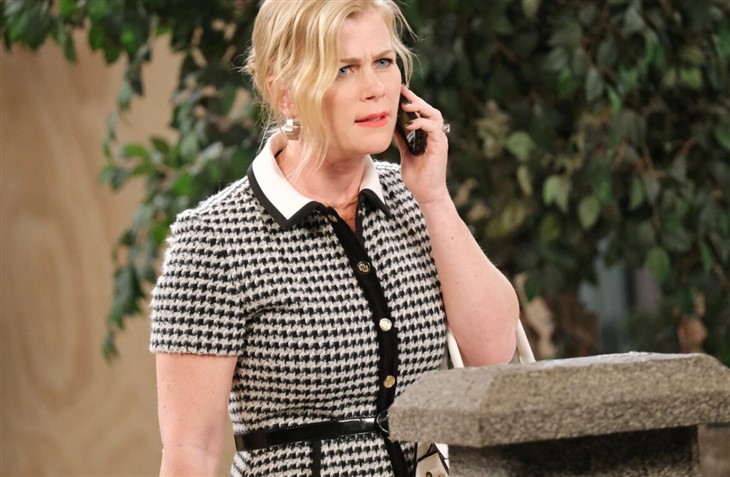 Days of Our Lives spoilers reveal that secrets will be exposed during a celebratory bash. This is most likely Eric Brady (Greg Vaughan) and Nicole Walker Brady’s (Arianne Zucker) anniversary party. We expect Sami DiMera (Alison Sweeney) to pick the worst time to expose Nicole’s betrayal. If she actually does this, Nicole will likely fire back by exposing Sami’s cheating.

Days Of Our Lives Spoilers – Eric Brady’s Return To Salem

DOOL spoilers reveal that Eric returns to Salem during the week of July 12. Nicole has been waiting nearly a year to enjoy life as a newlywed. It’s true that she encouraged Eric to listen to God’s calling and go to the Congo to serve villagers. However, he promised to only be gone for three months. Each time Nicole gets prepared for Eric to come home, he calls to tell her he signed up for another three months. Finally, “Ericole” will be able to reunite and act like a married couple.

It is confirmed that next week, an anniversary party will be planned for Eric and Nicole. There will be a lot of guests attending, including Sami, EJ DiMera (Dan Feurriegel) and Belle Brady (Martha Madison) just to name a few. It is hinted that there will be exposed secrets during a celebration, which we assume must be the anniversary party.

Days of Our Lives spoilers reveal that Sami tries to tempt Xander Cook (Paul Telfer) with an offer. She likely blackmails him into giving her confirmation or even proof that he slept with Nicole. Xander has been giving hints of “Lumi” to Nicole and has been burned by Sami and EJ before. However, he just might take it if he gets the payment in advance and if it’s a nice-sized amount.

Plus, it will be difficult for Xander to pass up the chance to get under Eric’s skin. The two men are sworn enemies and Xander gets giddy each time he thinks about telling Eric that he took his wife to bed.

Sami would pick the anniversary party as the perfect opportunity to expose Nicole’s one-night stand. However, if she does this, then Nicole will likely fire back and tell everyone, including EJ, about Sami and Lucas Horton’s (Bryan Dattilo) affair. After all, no party in Salem goes without some sort of drama or chaos.

Will Nicole lose Eric when the truth about her one-night stand with Xander comes out? What does the future hold for EJ and Sami? We will have to keep watching the NBC soap to find out what happens next with these characters.

The Young And The Restless Comings And Goings: Chelsea Newman Exits