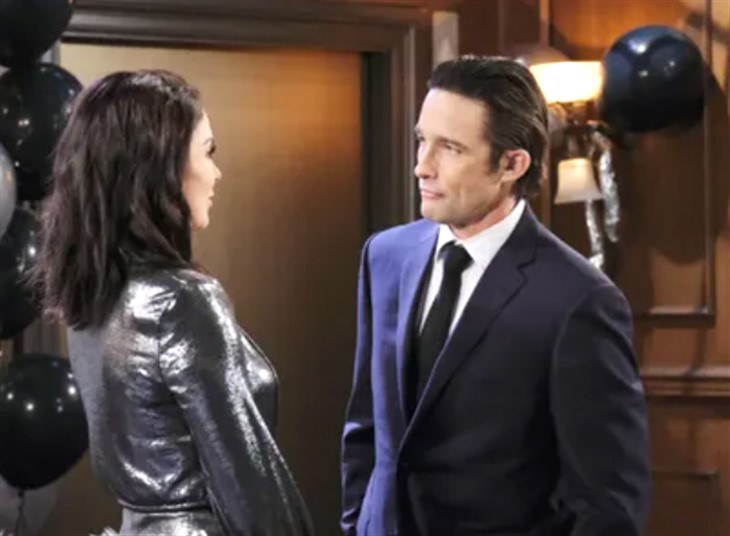 Days of Our Lives (DOOL) spoilers for the week of January 18 reveal that in Salem Xander Kiriakis (Paul Telfer) had no idea what he was doing when exposing Philip Kiriakis (Jay Kenneth Johnson). When the mob comes to Salem, Philip ends up in mortal danger. Despite the risks to her own life, Chloe Lane (Nadia Bjorlin) hides her friend and former lover.

DOOL spoilers reveal that Xander has been hunting for information on what Philip is really up to. He does find the information he has been searching for and it’s worse than he ever imagined. He suspected Philip was up to something, but didn’t think it would be money laundering. Even though Sarah Horton (Linsey Godfrey) thinks they should keep this quiet for the time being, Xander doesn’t listen. He gets really loud about the scheme and gets the attention of the Vitali family.

It is teased that during the week of January 18, the Vitali family will come to Salem. We have a feeling that it’s not just going to be Angelo Vitali (Angelo Tiffe) and we could see multiple members of Ava Vitali’s (Tamara Braun) family. Philip comes under fire for many reasons, but the biggest one is allowing someone to find out about the money laundering. That puts the mob’s entire operation at risk and they are looking for blood.

Days of Our Lives spoilers reveal that same week, Chloe will give Philip shelter. He has told her before that he doesn’t want to have her death on his hands. That’s why he didn’t tell her the truth from the beginning. It’s also why he begged her not to tell anyone, but she betrayed him and filled in Brady Black (Eric Martsolf). Now Chloe is putting herself right in the line of fire by hiding Philip from the mob.

Head writer Ron Carlivati previously told Soap Opera Digest that Xander’s actions would create a chain reaction that would have deadly consequences. Even though that suggests Philip or Xander could die, we don’t think either of them are in danger. Most likey, the death is someone from the Vitali family. Of course, it would be perfect if Charlie Dale (Mike C. Manning) somehow got caught in the crossfire and died, but that’s probably not going to happen.

However the mob isn’t Chloe’s only problem. She has ticked off Kristen DiMera (Stacy Hiaduk) and the woman is out for revenge. Look for Chloe to be in multiple sticky situations during the next few months, but we imagine she will overcome all of them. However, what does the future hold for Philip once the mob is out of the picture? Will he be able to get Victor Kiriakis’ (John Aniston) forgiveness? Or is the relationship destroyed forever?

Royal Family News: How to Stay Fit Like Kate Middleton And Meghan Markle During Lockdown