Days Of Our Lives Spoilers: Charlie Dale Pleads With Claire To Believe Him 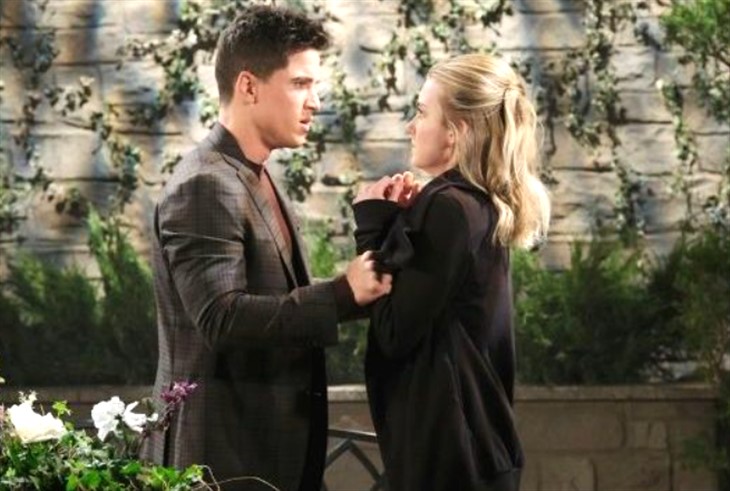 Days of Our Lives (DOOL) spoilers tease that Charlie Dale (Mike C. Manning) will plead with his ex-girlfriend Claire Brady (Isabel Durant) to believe him in an upcoming episode of Days of Our Lives; but Claire doesn’t trust him anymore!

Days of Our Lives viewers will remember that Claire stood by Charlie and believed him at first, although deep down she probably didn’t want to believe the worst of Tripp Dalton (Lucas Adams). After all, Claire had once been in love with Tripp and didn’t want to believe that he could rape her cousin Allie Horton (Lindsay Arnold). She especially didn’t want to accept the part about Allie being so drunk she had no defense when the rapist took advantage of the situation, and Tripp being the culprit! The truth about Charlie, who Claire considered to be her perfect soulmate, hit her very hard and she was heartbroken over it.

She is also angry at Charlie, since now she knows he was lying to her when he played Mr. Sweet and Innocent even in his apartment when she now knows he had his own mother tied up in a chair in another room! The last thing she wants now is to have anything to do with Charlie whatsoever – Tripp has been officially cleared and Allie’s memories are clear and now Claire believes Allie and Tripp over Charlie!

DOOL spoilers show when Charlie dares come looking for Claire and tries to get him to believe him that he is innocent and the whole thing is a frame-up, she is incensed at him! If he bothered to look at Claire’s past he would know better than to get on the wrong side of Claire Brady!

DOOL Spoilers – Claire Brady Might Not Lock Him In A Cabin And Set It On Fire, But She Might Want Charlie Dale To Think She Might!

Days of Our Lives spoilers tease Claire’s firebug and insane jealousy days may truly be behind her but she might not want Charlie to believe they are! Charlie could use a good old fashioned case of fear and paranoia to set him straight! Allie was so terrified that night that it may have been more her fear than the alcohol that caused her to not remember the rape except through hypnosis by her and Claire’s grandma Dr. Marlena Evans (Deidre Hall)!

The mind has a wonderful defense mechanism of a sort of amnesia to prevent trauma from destroying a person who has been through it, until they are ready to deal with the traumatic event. However, eventually the memories do come up, although usually not crystal clear and often through nightmares or triggers – such as when Charlie told Allie “Arrivederci!” He told her “Arrivederci” after he was finished ravishing her and blithely walked out the door of her flat!

This is what started Allie’s true memories to be ready to come to the surface when she went under hypnosis. Claire has truly been ashamed of her past, when she tried to kill both Tripp and her own aunt Ciara Brady Weston (Victoria Konefal) – Ciara, twice – by setting a cabin on fire with them trapped in it. In Ciara’s case she was tied up! She had not completely told Charlie the whole story, but now she tells it in graphic detail, and tells him he doesn’t believe he’s innocent any more than she was when she did those things! She hopes that he picked up on the implication that he might get the same treatment if he doesn’t stay away!

Bold And The Beautiful News: Jacqueline MacInnes Wood Due Date – Baby Watch Is On