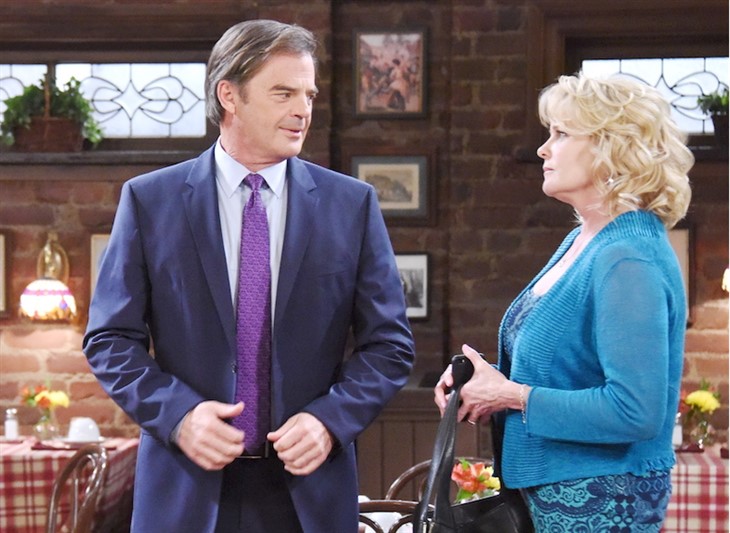 Days of Our Lives spoilers for the week of July 12 reveal that Bonnie Lockhart (Judi Evans) isn’t a patient woman. When she wants something, she wants it now and has no shame in asking for it. She is in love with Justin Kiriakis (Wally Kurth). If she waits for him to propose, she’ll be a bride at 90. So, Bonnie decides to take the lead and pop the question herself.

DOOL spoilers reveal that after Adrienne Kiriakis (also played by Evans) died, Bonnie returned to Salem. Nobody was happy to see her, especially Justin. He lashed out at his dead wife’s lookalike and nobody could blame him. After all, Bonnie was always up to something and her schemes usually involved hurting Adrienne.

Soon, Justin decided to help Bonnie with her book royalties lawsuit and they won. Bonnie donated every last penny. Then, they started to develop a romance, which horrified a lot of people in Salem. Most have gotten used to Justin and Bonnie by now, but she is still trying to prove herself. Plus, some people will never forget about the terrible things she did.

Whether you love her or hate her, one thing is clear. Bonnie tries really hard… perhaps too hard. She will always be a bit of a schemer, nosy, loud, presumptuous and a drama queen. However, she has tried to make better decisions and her negative traits have faded. In fact, Bonnie seems to have a really good heart. At the end of the day, she just wants to be loved, accepted and be worthy of being Justin’s girl.

Days of Our Lives spoilers reveal that Justin definitely has softened his heart toward Bonnie. He is aware of how everyone feels about her, though. It makes him feel conflicted and creates tension. Occasionally, Justin tries to have his friends and family get to know the Bonnie that he fell in love with. Some people do try to get to know her. However, others aren’t shy about blasting her every chance they get.

Due to Bonnie’s infamous reputation and Justin’s legal career, their relationship is not public. They are dating but it’s more of a low-profile romance. Bonnie wants to go public as a couple but Justin just can’t seem to take that step.

Bonnie sometimes misinterprets signals and doesn’t seem to grasp proper timing. For most people, if a lover wasn’t willing to go public with the romance, then they surely aren’t ready to walk down the aisle. However, Bonnie doesn’t think this way. All that is in her head right now is that she loves Justin and she knows he has feelings for her, too. So, she thinks that marriage is perfectly logical.

As much as we are warming up to Bonnie, we don’t think Justin will say yes to her marriage proposal. He simply isn’t ready to take that leap yet. Bonnie will view this as him rejecting her and will assume it means they’ll never tie the knot. Of course, this isn’t what Justin will mean. He might marry her one day, but he is a man that takes his time and has to know that it’s right. As of right now, the timing just isn’t appropriate.