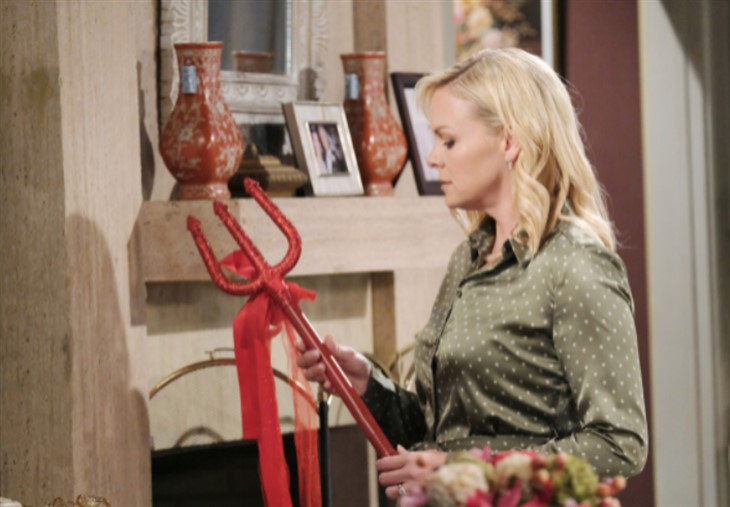 Days of Our Lives (DOOL) spoilers tease that Belle Brady (Martha Madison) will think about going up against her mother, knowing something’s not right with Marlena Evans (Deidre Hall) in an upcoming episode of Days of Our Lives!

Days Of Our Lives Spoilers – First A Devil Costume, Then Something Weird In The Living Room – And No John Black

Days of Our Lives viewers will recall Belle was stunned that her mother would wear a devil costume for Halloween, and then she and Shawn Brady (Brandon Beemer) found something weird in her living room – and no John Black, (Drake Hogestyn)! Shawn hasn’t compared notes with Steve Johnson (Stephen Nichols) yet, but Marlena’s evidence hasn’t been lining up with her testimony in regards to John going on a secret mission!

Belle is getting worried about both her mother’s strange behavior and her father’s continuing absence – if they talk to Steve and Kayla Johnson (Mary Beth Evans) it will become even more of a serious situation! Longtime Days of Our Lives viewers will remember that Belle wasn’t even a toddler when Marlena’s first possession happened, but with Johnny DiMera (Carson Boatman) making a movie about it, the possibility has entered her mind that she could be possessed again. Belle knows enough to have been stunned by the devil costume, so she obviously knows a lot of what happened to her mother back then. Perhaps the weird thing they find in the living room is John’s keepsake box with the Bible and the other items he used in Marlena’s exorcism – which may be something that MarDevil still won’t touch!

On the same day that Belle thinks about going up against her mother and confronting her, Ben and Ciara Weston (Robert Scott Wilson, Victoria Konefal) receive a bizarre baby gift! Days of Our Lives viewers will recall that satan sought to be born again in Ben and Ciara’s baby, ala “Rosemary’s Baby”. Johnny had told Chanel Dupree (Raven Bowens) it was one of his favorite horror movies, and she had been very disturbed by it! Marlena, in her right mind, had tried to stop satan from interfering with Ciara’s desire to conceive and Ben’s fear that his own “evil genes” would pass down to their offspring!

But once Marlena was herself inhabited by satan, the advice given to Ben was different – she, as MarDevil, pretty much pushed Ben into feeling safe to have children with Ciara! Days of Our Lives viewers will recall that no one else except Ben and Ciara know about Susan Banks’ (Stacy Haiduk) dire warning to the couple about the evil surrounding Ciara’s little bun in the oven, and MarDevil made sure no one else would! Ciara is bound to call Shawn about the bizarre gift, since he is her older brother – and soon, Marlena’s friends and family will all realize that she is newly possessed. But for now, poor Belle won’t know what she’s getting into when she tries tangling with MarDevil – who is considerably more of a danger than even Jan Spears (Heather Lindell)!

Days of Our Lives viewers know that if Belle does decide to confront “Marlena”, she must exercise extreme caution in what she says to her. Belle may be a good attorney, but she’s never had experience at arguing a case with the devil, although Jan Spears is pretty close to one! Jan still was a devil but not THE devil!

Days of Our Lives viewers know that as MarDevil, “Marlena” can read minds and sense what’s in souls, as well as take over minds and souls! MarDevil is no one who should be taken lightly or ignored completely, and Belle may suspect that her mother is again possessed. It’s a good bet that Belle may be considering getting the devil to show himself in Marlena, but where would she go from there? That is only one of the important things that Belle needs to think about before she tries!