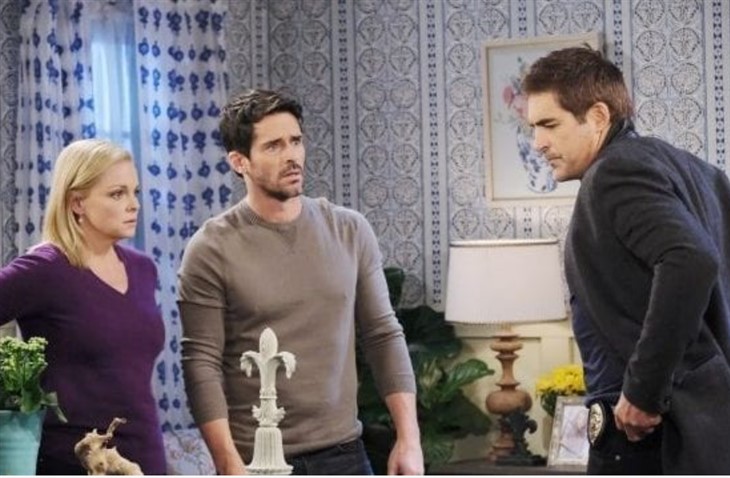 Days of Our Lives (DOOL) spoilers say that Belle Black (Martha Madison) is arrested, as both Shawn Black (Brandon Beemer) and Rafe Hernandez (Galen Gering) are forced to consider her as a suspect in Charlie Dale’s (Michael Manning) murder. In fact, it is Rafe who confronts Belle about the button from her coat that was found next to Charlie’s body. Sure enough, Belle is going to have a lot of explaining to do. Here’s what you need to know.

Days Of Our Lives Spoilers – Belle Black Is Arrested

According to the latest edition of Soap Opera Digest spoilers, Belle clearly doesn’t know what to make of this all. Of course, she immediately suspects that her sister Sami Horton (Allison Sweeney) might have been involved in this. Of course, Sami was already under suspicion and since she hates her sister, Belle believes that she might have been set up by her.

Days of Our Lives spoilers say that when Melinda pushes Rafe and Shawn to make an arrest, Rafe has no choice but to handcuff Belle and bring her to the station. But at the same time, Belle knows that she is innocent, and as an attorney, if she’s going to be arrested, she is well positioned.

Days Of Our Lives (DOOL) Spoilers: Belle Arrested, But It Might Not Be For Charlie’s Murder https://t.co/7dOWlCEFHu pic.twitter.com/Ej0FBpuQsY

Martha Madison, who plays Belle on the hit NBC soap opera, puts it this way to the publication, “But I think her mind is racing, trying to figure out how this all came to be. She’s pretty quick to come to the fact that she’s been framed. She really brainstorms with her family trying to figure out who in the world would frame her for this, and who the real killer would be because it’s not Belle.”

Or at least, that’s what Belle believes. Now, whether or not Salem is going to find the real killer remains to be seen. Of course, DOOL fans will have to tune in each and every day to find out what will happen next.

Days of Our Lives airs weekdays on the NBC network. Check your local listings for times. Are you a fan of daytime television? Be sure to catch up on everything happening with Days of Our Lives right now. Come back here often for all the latest Days of Our Lives spoilers, news, and soap opera updates.