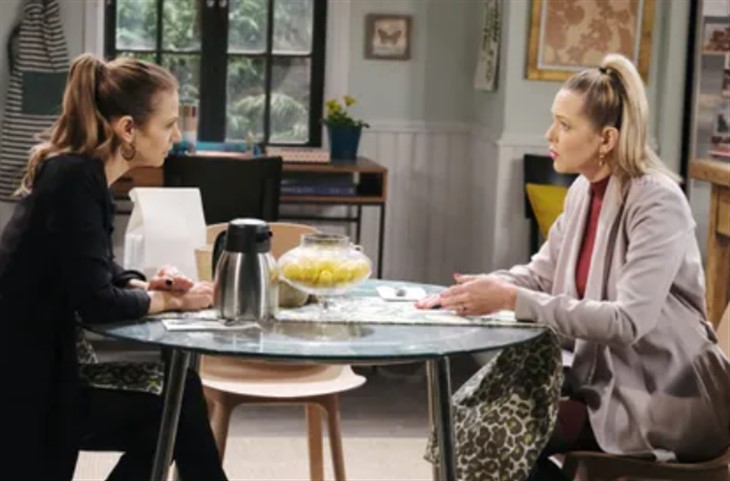 Days of Our Lives spoilers reveal that Nicole Walker Brady (Arianne Zucker) is claiming to be rooting for Rafe Hernandez (Galen Gering) and Ava Vitali (Tamara Braun). Despite being married to Eric Brady (Greg Vaughan), Nicole has feelings for Rafe. Ava finally realizes that Nicole’s no friend, but a competition who wants Rafe to herself.

DOOL spoilers reveal that Nicole is married, but her husband has been in the Congo for nearly a year now. Nicole still loves Eric, but she is the type of person that always needs someone by her side. If left alone for too long, her eyes and heart will wander.

This has happened already and Nicole admitted to Rafe how she felt. However, he made it clear that he was in a romance with Ava. He also explained that even if he were available, he would never cross that line because she’s a married woman. Then, Rafe offered Nicole a way out of the awkward conversation by suggesting Nicole was just missing Eric.

Even though Nicole had that chat, she made it clear she didn’t approve of Rafe and Ava’s kiss. She soon changed her tune, though. To Rafe and Ava, it seems like Nicole is one of their few cheerleaders. Everyone else can’t forget about the terrible things Ava did in the past, her connection to the mob, or her obsession with Steve “Patch” Johnson (Stephen Nichols). So, the couple appreciates having someone in their corner.

Days of Our Lives spoilers reveal that Nicole still has feelings for Rafe. She just is keeping it to herself. This is obvious from how Nicole was acting after she slept with Xander Kiriakis (Paul Telfer). She was determined to keep her one-night stand from Rafe. However, she wasn’t nearly as concerned about Eric finding out. She might justify it as Eric not being in town, so he’s less likely to find out. No matter what Nicole says, it’s clear that she didn’t want Rafe to find out because of her own feelings for him.

The summer promo confirms Eric is finally coming home. He will jump right back into Nicole’s life, as well as her bed. However, she struggles to keep the truth about her one-night stand from him. She even considers confessing the truth, even though she knows it will probably be the end of their marriage. If it were anyone else, Eric might be able to find forgiveness, but Xander is another story.

Head writer Ron Carlivati teased to Soap Opera Digest that Nicole thinks everything would be fine if Eric were home. However, when they do reunite, it doesn’t turn out to be what she imagined in her mind.

“Ava is a pretty smart cookie and she starts to see that Nicole is maybe suddenly not as big of a cheerleader of Rafe and Ava as she was before. At the same time, Nicole is still a married woman and her ideal situation is that Eric comes home. But it just may not turn out that way.”