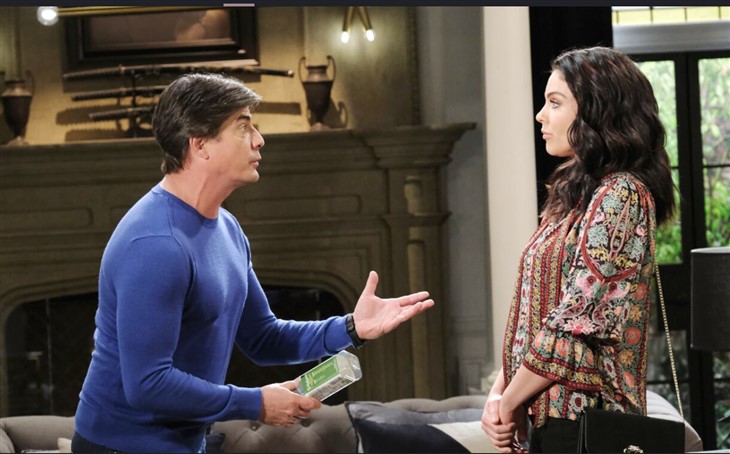 Days of Our Lives (DOOL) spoilers say that Lucas Horton (Bryan R. Datillo) has found himself in quite a pickle. He is forced into a rather difficult situation – and one that he is completely responsible for on his own – when he tells Chloe Lane (Nadia Bjorlin) that he has a brain tumor, but only because he wants to reunite with her. Talk about a whopper of a lie, right? Read on for all of the latest spoilers.

Speaking to Soap Opera Digest in a new interview, actor Bryan R. Datillo, who plays Lucas on the hit NBC soap, says that all his character really wants to do is get Chloe away from Brady Black (Eric Martsolf). But at the same time, he knows that it won’t be too easy.

Bryan puts it this way to the publication, “When he was kind of put on that spot, it popped in his head as this great idea to get sympathy or distract her from Brady. He feels guilty because he doesn’t like to like to Chloe, so he’s trying to do it with the least amount of damage to Chloe as possible.”

Days of Our Lives spoilers say that Chloe tells Lucas that she’s made an appointment with him to see a specialist. Clearly, he’s very concerned. But at the same time, Lucas freaks out because he now knows that he is busted with his life.

Days Of Our Lives Spoilers: Gabi’s Romantic Future Confirmed, Is It With Philip Or Jake?https://t.co/A2CG0LbFD7

DOOL Spoilers – Will Chloe Lane Find Out The Truth?

If that weren’t enough, Sami Brady (Alison Sweeney) also blasts Lucas for coming up with his lie. She definitely tells him what he needs to hear, and that he’s an idiot.

Bryan previews, “But Lucas goes to Chloe and he’s about to tell her the truth and Sami shows up and she says, ‘Oh, are you having an episode again? The doctor said you would make no sense.’ Sami makes sure Lucas doesn’t spill the beans.”

Let’s see how long this lie will last! Days of Our Lives airs weekdays on the NBC network. Check your local listings for times. Are you a fan of daytime television? Be sure to catch up on everything happening with Days of Our Lives right now. Come back here often for all the latest Days of Our Lives spoilers, news, and updates.