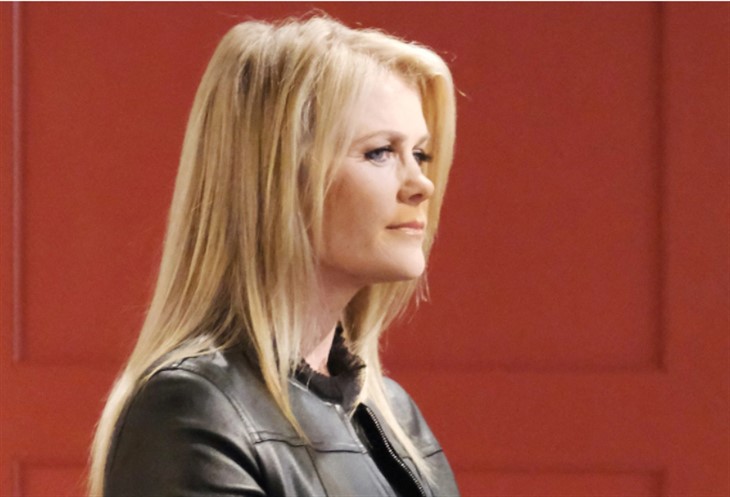 Days of Our Lives (DOOL) spoilers reveal that Sami Brady (Alison Sweeney) and Lucas Horton’s (Bryan Dattilo) plan fails. That is unacceptable to Kristen DiMera (Stacy Haiduk). We know that she kidnaps Lucas and she also pushes Sami to get rid of Chloe Lane (Nadia Bjorlin). Could she try to force Sami to kill Chloe, only the kidnapping plan goes all wrong?

DOOL spoilers reveal that Sami is desperate to keep her one-night stand secret. She doesn’t want her husband to find out the truth and will do just about anything. Right now, we are seeing Sami and Lucas go to great lengths to keep Kristen quiet. They have agreed to try and lure Chloe away from Brady Black (Eric Martsolf). However, their plan will not go well and ends up blowing up in their faces.

It is confirmed that Sami resorts to using her old alter ego, “Stan” (Dan Wells). Her goal is to convince Chloe that Lucas really is dying from a brain tumor. However, it is already confirmed that Chloe blasts Lucas and Sami for their scheme. So, the plan fails and that won’t be good news for Sami. She will have to deal with Kristen and try to stop her from going straight to EJ DiMera (formerly James Scott).

Days of Our Lives spoilers reveal that Sami learns of Kristen’s new masquerade. We are thinking that it won’t just be one time that she wears the Kate Roberts DiMera (Lauren Koslow) mask. There could be some surprise events that force Kristen to take on another personality. Perhaps Marlena Evans (Deidre Hall) finally tells “Susan Banks” (also played by Haiduk) that it’s time for her to leave.

If that happens, then Kristen will have to find a new way to roam around Salem without exposing her true identity. Most likely, she would just impersonate Kate. However, that plan will end up blowing up when the real Kate escapes the secret room. Then, Sami finds out about Kristen’s new masquerade. She already knows that Kristen has been impersonating Susan, so that must mean the villain takes on someone else, such as Kate.

It is confirmed that Kristen kidnaps one person but ends up with two hostages instead. It’s possible that in order to force Sami to kill Chloe, Kristen might kidnap Lucas. While Sami will not want anything happening to Lucas, Kristen’s plan will quickly unravel. Somehow, both Lucas and Sami end up being held, hostage. It sounds like Kristen plans on killing them both because sparks fly for “Lumi” when they face death. Now, we know Lucas and Sami end up surviving but how does this story with Kristen end? We will have to keep watching the NBC soap to find out what happens next.