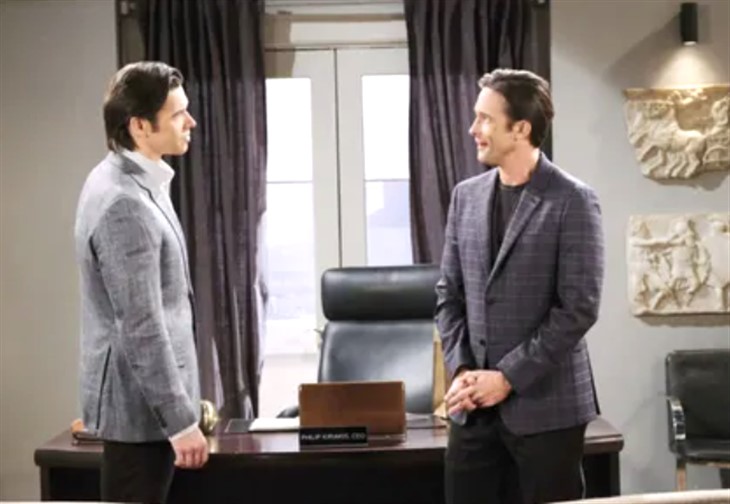 Days of Our Lives spoilers (DOOL) for the week of January 18 reveal that in Salem Xander Kiriakis (Paul Telfer) ends up putting Philip Kiriakis’ (Jay Kenneth Johnson) life in danger. When Sarah Horton (Linsey Godfrey), she feels guilty and may try to take action. Will she be brave enough to go on a rescue mission and face the mob to save Philip?

DOOL spoilers reveal that Xander finds the information he has been searching for ever since Philip returned to Salem. Of course, it’s all because of Sarah. She’s the one who copied the files from Philip’s computer onto a flash drive for Xander. After scouring the files, Xander will finally find what he is looking for. He becomes furious that Philip was using Titan, his own family’s business, for money laundering. However, he doesn’t have all the information and his actions could jeopardize Philip’s life.

It was previously teased by head writer Ron Carlivati that Xander’s actions would set off a domino effect. The scribe told Soap Opera Digest that a series of events would take place because of Xander that would get the mob’s attention. He also confirmed that the battle turns deadly, so expect at least one death. However, we are not sure if it is a major character or someone insignificant.

Days of Our Lives spoilers reveal that during the week of January 18, Philip’s life will be put in grave danger. Sarah realizes this and she immediately feels guilty. Not really for her own snooping around, but because of Xander getting the mob’s attention. She warned him that they should be more low-key about the money laundering, but Xander didn’t listen.

It is teased that Sarah could be so worried about Xander putting Philip’s life on the line that she might take action. Even though she’s a doctor, she could try saving lives in another way in the next few weeks. Would she really be so bold and brazen to take on the mob? Or at least create some sort of diversion or scheme to save Philip’s life? It’s possible, but we’re not sure how Xander will feel about that. Even though Philip did do a dirty thing, he is Victor Kiriakis’ (John Aniston) son and Xander needs to remember that.

What do you think Sarah is going to do when she finds out that Xander’s explosive temper got the attention of the mob? When she learns that Philip’s life is at risk, will she go to extremes to do damage control? We will have to keep watching the NBC soap to find out how this story ends.