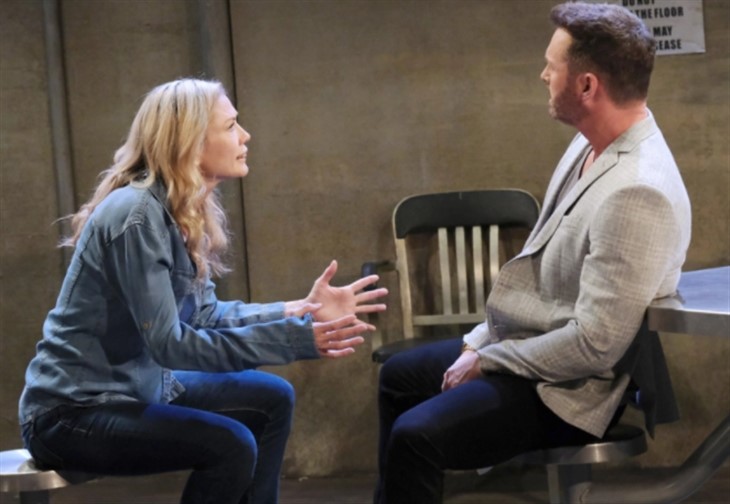 Days of Our Lives (DOOL) spoilers for Monday, May 10, 2021, reveal Kristen making a grave mistake that can cost her everything.

Days Of Our Lives Spoilers – The End Of The Road For Kristen DiMera?

Kristen (Stacy Haiduk) is supposed to be in Statesville and that’s exactly where Brady (Eric Martsolf) thinks she has been for months. He has no idea that he’s been with her every day over at John (Drake Hogestyn) and Marlena’s (Deidre Hall) but she’s been wearing her Susan disguise. Meanwhile, the woman he has been visiting in jail and bringing pictures of their daughter is Susan.

During his latest visit to Susan, something terrible happens. It looks like Susan slips up but does that slip-up give away her game or is it something worse? There always seems to be mayhem in that jail but this time the mayhem is on the side of the road and even involves Kate Roberts (Lauren Koslow).

Days of Our Lives spoilers reveal that Kristen’s mistake causes something dangerous to occur and Brady looks to be the one to pay the price.

Kristen did not realize she’d have a visitor in the car as she tried to escape town. And Brady did not realize that trying to find Kristen before she ended up in jail for many more years would be this much of a problem.

There’s a head-on collision and Brady might not make it, making Kristen responsible for what happens to him. How does Chloe (Nadia Bjorlin) react when he is brought into the hospital. After all, she just realized that Lucas (Bryan R. Dattilo) and Sami (Alison Sweeney) have been lying to her and she is in no mood to play games. She’s in love with Brady and determined to make sure he stays alive.

We should remember that Susan thought she was protecting Brady from Chloe when she agreed to switch places with Kristen. Brady had just been shot. Now he is in a car crash. How much can this man’s body take? His last car crash resulted in a heart transplant so what might happen now? Stay tuned to Days of Our Lives weekdays to see how this all plays out.