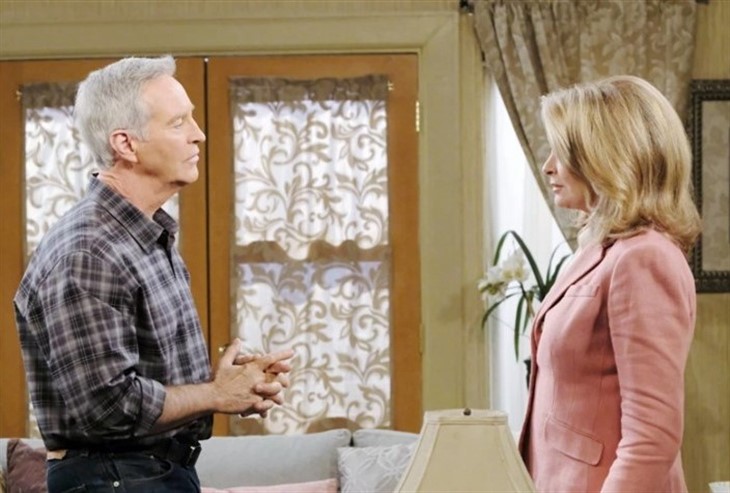 Days of Our Lives (DOOL) spoilers tease that Marlena Evans (Deidre Hall) will grill John Black (Drake Hogestyn) about his disappearing act on an upcoming episode of Days of Our Lives! It seems as though John may have been out all night, and he’ll have to answer for his absence!

Days of Our Lives viewers will recall that John hunted down Charlie Dale (Mike C. Manning) after Charlie flipped out on Claire Brady, (Isabel Durant) who tried to lure him into a trap. Charlie has been proven the rapist of Marlena’s granddaughter Allie Horton (Lindsay Arnold) but it appeared that he may not pay for his crime in spite of the proof.

DOOL recaps reveal DNA tests showed he was the father of Allie’s baby, but without a rape kit or a witness it’s still a he said she said in a court of law. Claire had intended to trick him into confessing to the crime, although even if she had been successful he could have fought it with an entrapment defense.

John found him in Horton Town Square, where he grabbed him by the coat and pulled him off his feet, telling him he’s a dead man! John was livid with Charlie and wanted to teach him a lesson he would never forget! Days of Our Lives viewers will also remember that several months ago, John had a brain aneurysm, and the residual effects left him with a rather uncontrollable temper, and in general, much more emotional than he had been previously! Viewers will recall there was a few times that his old buddy and partner Steve “Patch” Johnson (Stephen Nichols) got on John’s wrong side, and he had to be restrained from hitting him! John also strangled Jan Spears (Heather Lindell)!

Marlena knows to worry when John doesn’t return home at night – there is always something wrong. She is even more concerned knowing he has these residual emotional problems from his brain aneurysm, and that he has been very upset over the whole situation with Allie’s rape and that Claire had been dating Allie’s rapist. John now knows, along with practically the whole town, that it was Charlie, not Tripp Dalton (Lucas Adams) who was the perpetrator but also knows he may not pay for his crimes!

According to Days of Our Lives spoilers, Marlena may find out that Charlie has been reported missing, probably by Philip Kiriakis (Jay Kenneth Johnson) when he doesn’t show up for work at Titan Industries where he was working as an intern. She finally locates John – in the Horton Town Square, and he seems a little out of it! They sit on a bench behind planters of the same flowers that John threatened Charlie in front of the night before. John looks tired and upset and tells “Doc” about his night “out”.

Marlena worries that he went after Charlie, and he admits he did and hopes he scared some sense into him. He had warned him to stay away from Claire and Allie, and Charlie acted like a tough guy. John wanted him to know in no uncertain terms he wasn’t as tough as he thought he was and was going to make sure he knew it. DOOL spoilers hint Marlena is still concerned – and continues to grill him on why he was out all night. That encounter shouldn’t have taken all night long! John isn’t evasive, but he doesn’t volunteer much either – he just says he was so worked up he wandered around town trying to get calmed down! Now Marlena is really worried!