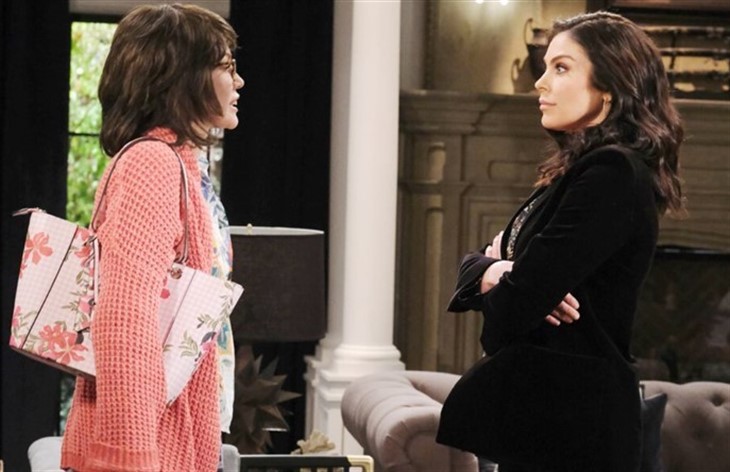 Days of Our Lives spoilers reveal that Kristen DiMera (Stacy Haiduk) will get even more desperate. By the end of this week, Kristen’s world and scheme crumble around her. Chloe Lane (Nadia Bjorlin) sees Kristen in the flesh. The villain’s next move is to grab Chloe around the neck as the opera singer begs for her life. Who will jump in and save the day?

DOOL spoilers reveal that on Friday, Kate Roberts DiMera (Lauren Koslow) escaped and fought Kristen. While Kristen was trying to subdue Kate, her car veered into the other lane and crashed into Brady Black (Eric Martsolf). He will regain consciousness long enough to call for help. However, he has severe head trauma and passes out again.

Even after being rushed to the hospital, Brady still has not regained consciousness. So, he is unable to tell anyone right now about Kristen’s switch with Susan Banks (also played by Haiduk).

After Kate escapes, Kristen calls Sami Brady (Alison Sweeney) and demands she recapture and get rid of the hostage. However, Sami refuses to harm Kate or anyone else. When she tells Kristen no, it leads to Sami being drugged and thrown into the DiMera dungeon. Then, Lucas Horton (Bryan Dattilo) is also dragged into the secret room. Kristen plans on killing them both but has something else to do first.

Days Of Our Lives Spoilers- Catching Kristen DiMera In Disguise

Days of Our Lives spoilers reveal that Chloe will end up catching Kristen in Susan’s disguise. Perhaps she walks in as Kristen isn’t in full “Susan” mode or maybe she finally sees through the mask. In any event, Chloe now realizes that “Susan” is really Kristen and her life is in danger once again.

In a sneak peek photo published in Soap Opera Digest magazine, Kristen has one arm tightly around Chloe’s neck. The opera singer looks absolutely terrified and looks like she is in physical pain. The image doesn’t show if Kristen has a knife at Chloe’s throat or perhaps it is a syringe. It is most likely the latter though since she used a needle on Sami, Kate, and Sarah Horton (Linsey Godfrey).

Days of Our Lives (DOOL) Spoilers: Gabi And Jake Take Their Passion To The Bedroom – Until Kate Shows Uphttps://t.co/4CEmjDDffW

However, with Brady unconscious in the hospital, who will save Chloe? From the picture, it doesn’t look like Kristen and Chloe are alone. Kristen looks like she is staring straight ahead as if she is looking at someone. We know that when Brady regains consciousness, he tells John Black (Drake Hogestyn) about Kristen’s prison escape. So, it might be Marlena Evans (Deidre Hall) who is at the penthouse. Could “Doc” end up saving Chloe’s life or will someone else end up stopping Kristen’s killer rampage? We will have to keep watching the NBC soap to see how this story ends.