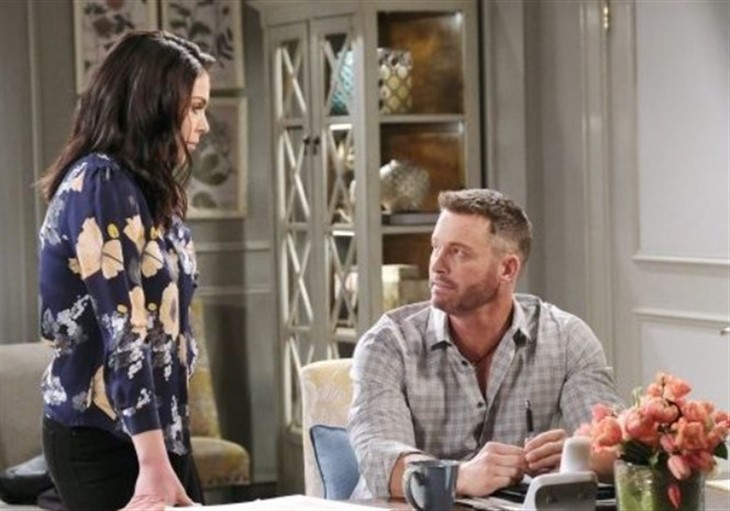 Days of Our Lives (DOOL) spoilers reveal that in Salem Kristen DiMera (Stacy Haiduk) is pretending to be Susan Banks (also played by Haiduk). In the weekly promo, Chloe Lane (Nadia Bjorlin) brings a muffin to Brady Black (Eric Martsolf). Before he can take a bite, Kristen violently slaps the muffin so hard it goes flying across the room. Will the violent act expose her true identity?

DOOL spoilers reveal that Chloe has been taking care of Brady since he got shot. She sat by his hospital bed throughout his coma. She tended to his needs each day until he was released from the hospital. Now, she is with Brady as he continues recovering from the gunshot wound. She decides to bring him a tasty muffin, which he quickly grabs. However, he doesn’t get to eat it.

In the weekly promo, Kristen is watching the whole breakfast interaction go down. Just as Brady is about to take a bite into the muffin, Kristen violently swings her arm and slaps the muffin right out of his hand. She hits it so hard that it goes flying clear across the room.

Days of Our Lives spoilers reveal that after attacking the muffin, Kristen calmly looks at Brady and Chloe. She has a completely straight face as “Bhloe” stares at her in shock. Chloe is so stunned that she can’t say anything. Brady’s mouth is dropped open and his shock soon turns to disbelief and then anger. He’s going to ask her why she did that and what’s wrong with her. Kristen will have to come up with a good excuse, but what will she say? We’re sure that Kristen will come up with a good excuse, like she thought Brady was allergic or muffins have too many carbs. However, the more she gets in between Brady and Chloe, the more suspicious she will look.

Even though Kristen is trying not to let on that she really isn’t Susan, someone is going to figure out the truth soon. If she keeps acting out, hovering over Brady, and preventing Chloe from changing bandages, she will end up getting caught. Even if Kristen somehow continues fooling everyone, the same can’t be said for the real Susan. It’s surprising that Lani Price Grant (Sal Stowers) didn’t recognize that Kristen was literally not herself during the prison visit.

When will the truth finally come out? Will Chloe end up getting attacked when Kristen finally explodes? Or can someone figure out that Kristen and Susan traded places before it’s too late? We will have to keep watching the NBC soap to find out what happens next.