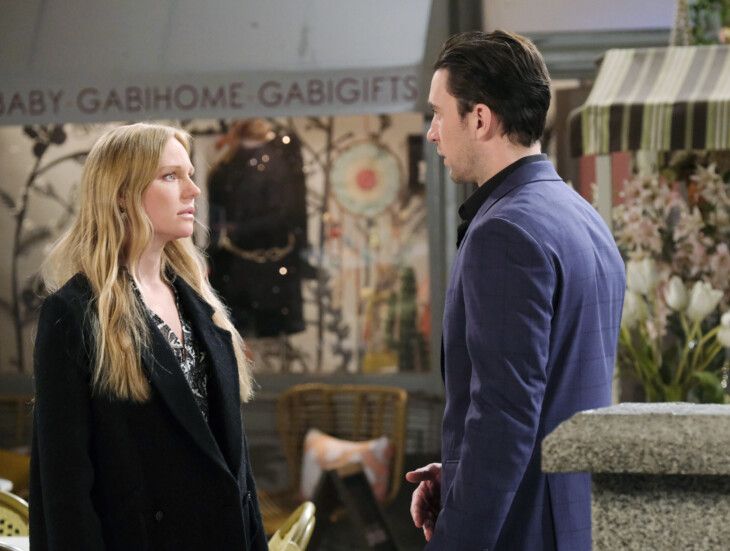 Days of Our Lives (DOOL) spoilers reveal that in Salem Abigail DiMera (Marci Miller) moves back into the mansion. However, everything is not okay with “Chabby.” The head writer explained that the marriage will be hard to fix. Abigail’s anger isn’t about Gwen Rizczech (Emily O’Brien) or cheating. The issue actually pre-dates Gwen and it will take a while before Chad DiMera (Billy Flynn) can fix what’s broken.

Days Of Our Lives Spoilers – Gwen Rizczech Didn’t Cause Problem

DOOL spoilers reveal that Gwen has caused all kinds of problems with Chad and Abigail, as well as Jack Deveraux (Matthew Ashford) and Jennifer Horton (Cady McClain). However, the fallout from the one-night stand really wasn’t caused by Gwen. She simply used the insecurity and issues that were already there and capitalized on those pre-existing problems, mostly with Chad, to destroy “Chabby.”

Speaking to Soaps.com, Carlivati explained that Abigail moving out wasn’t really about Chad sleeping with Gwen. She’s upset about the cheating, but that’s small potatoes compared to what she’s really angry about. The issue for Abigail is the fact that Chad trusts her so little that he was willing to believe whatever people said about her, even if it was ridiculous and not true. That he took the word of someone he barely knows over his own wife.

Days of Our Lives spoilers reveal that Chad’s issues with his marriage pre-date Gwen. They are deep, problematic, and tangled. One of his issues about not trusting Abigail is due to her affair with Stefan DiMera (Brandon Barash). It’s also why he can’t bring himself to give Jake DiMera (also played by Barash) a chance. Abigail was at the peak of her DID (disassociative identity disorder) and it wasn’t really Abigail, but one of her alter personalities, Gabby (who we like to refer to as ‘Gabigail.’) Despite Chad knowing it really wasn’t his Abigail, that doesn’t erase the pain. Especially with how cruel and “in your face” she was about sleeping with Stefan.

There is also his issues with her hallucinations. They have caused so much pain for the couple. That’s not Abigail’s fault and she is better now, but again, that doesn’t erase the pain it caused him. When he slammed Abigail’s mental health issues to Gwen, that was him speaking how he really felt. So, part of him knows Abigail was sick, but the other part wonders how much of it is just an excuse. When people don’t release those negative feelings and doubts, they will eventually build like a pressure cooker until that person explodes. And it usually happens at the worst possible time or it will be “out of the blue.”

Carlivati said that “Chabby” isn’t over, they just have a long journey to fix their marriage. But he wanted it won’t be easy.

“There’s something broken beneath the surface here, and that’s going to be difficult to repair. There are issues at play that Chad is going to have to deal with. It’s not going to be as simple as Abigail saying, ‘I forgive you for sleeping with Gwen.’”

Even though fans might be upset over “Chabby” continuing to go through challenges, the good part is we just have to wait for the moment when they finally come back together. Not just physically, but really come together with all their issues resolved. So they can have the kind of relationship that they used to. But that is going to take time, patience, raw honesty, and hard work.