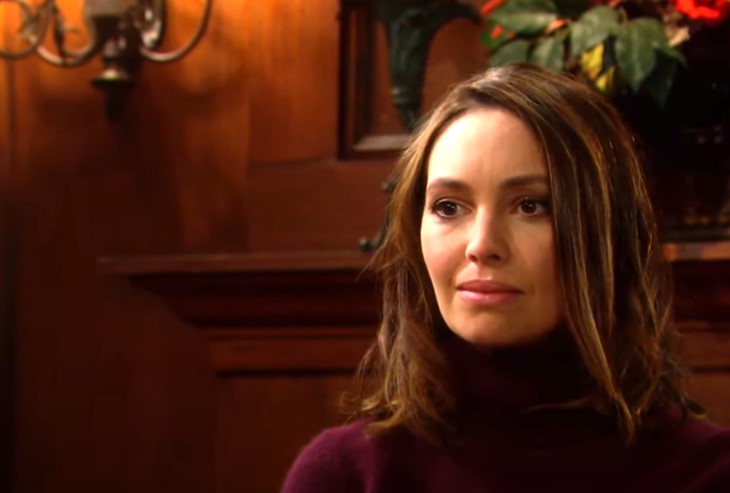 Days of Our Lives (DOOL) spoilers for the week of May 17 reveal that Dr. Snyder (Michael Lowry) blackmails Gwen Rizczech (Emily O’Brien). He is hiding a big secret and it most likely has to do with Jan Spears (Heather Lindell). While Dr. Snyder is trying to cover his tracks, Gwen must discover the truth. However, Gwen chooses to confess rather than be blackmailed.

DOOL spoilers reveal that Gwen lost her baby. However, everyone believes that Abigail DiMera (Marci Miller) caused the miscarriage. The only people that know the truth are Gwen and Dr. Snyder. In fact, Abigail will end up leaving Salem next week, news that leaves both Chad DiMera (Billy Flynn) and Gabi Hernandez (Camila Banus) shocked.

Dr. Snyder isn’t just the person who told Gwen that she lost the baby both times she was in the hospital. He is also the physician that oversaw Jan’s care while she was comatose. As legally required, Dr. Snyder called Belle Brady (Martha Madison) when the monitors indicated that Jan was close to waking up from her coma. However, Shawn Brady (Brandon Beemer) and Belle saw video footage that proves Jan was awake several weeks before Belle got that phone call.

Days of Our Lives spoilers confirm that during the week of May 17, Dr. Snyder and Jan will have a blackmail storyline. It’s not Gwen that blackmails the emergency room physician, though. It is the other way around. Gwen finds out something about Dr. Snyder that he doesn’t want to get out. He blackmails Gwen and threatens to expose her miscarriage lie unless she stays quiet.

However, Gwen isn’t going to allow Dr. Snyder to blackmail or threaten her. She decides to do the right thing and confess the truth. She tells Jack Deveraux (Matthew Ashford) the truth about her miscarriage and why she blamed Abigail. Jack will be horrified and disappointed in Gwen. However, he will likely forgive her.

When he asks why she decided to tell the truth, Gwen will probably tell him about Dr. Snyder’s blackmail. That will lead Jack to inform Shawn and Belle of the shocking truth. Jan didn’t wake up and sneak out of the hospital on her own. She had help and it was none other than Dr. Snyder, but why would he help someone like Jan? That is exactly what we are going to find out in the next few weeks.

Why do you think Dr. Snyder helps Jan Spears? Does Jan know a terrible secret about the physician? Or is there a more sinister reason why the doctor would put his entire career in jeopardy just so Jan could frame Belle for murder?