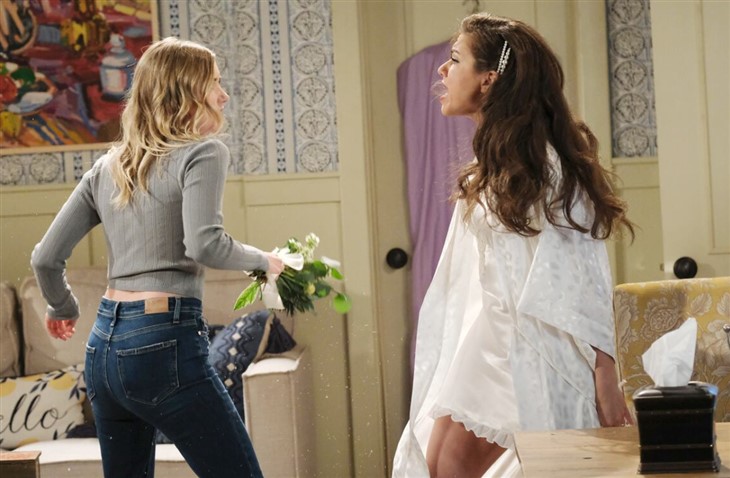 Days of Our Lives (DOOL) spoilers reveal that in Salem Claire Brady (Isabel Durant) has a confrontation with Ciara Brady (Victoria Konefal) on her wedding day. Claire will definitely have some things to say to her aunt about her marrying Theo Carver (Cameron Johnson) on the same day as her anniversary to Ben Weston (Robert Scott Wilson). Things will get explosive between the two.

Days Of Our Lives Spoilers – Claire Brady Has Enough

DOOL spoilers reveal that Claire has been trying to play it carefully with Ciara. Even though they made amends over a year ago, that was before the amnesia. The last thing Ciara remembers post-amnesia is catching Claire nearly getting it on with her boyfriend. Plus, she found out that Claire tried to set her on fire not once, but on two separate occasions.

Recently, Claire had enough of Ciara’s verbal abuse. She called her aunt out on her behavior and told her she’s not groveling anymore.

Ciara is still technically married to Ben. She has been trying to get a divorce, but Ben won’t sign the papers and Justin Kiriakis (Wally Kurth) refuses to be her lawyer. Ciara will decide that an annulment would be better. She must get one quickly because her wedding to Theo is next week.

Days of Our Lives spoilers reveal that Abe Carver (James Reynolds) was initially excited about Theo’s engagement. He’s known Ciara all of her life and she was good friends with Theo growing up. So, Abe was on board with Theo and Ciara getting married.

However, he has to admit that Ciara’s amnesia could come back at any time. As the wedding day gets closer, Abe will have a change of heart. He will urge Theo to change the wedding date. This is because Theo is getting married on the same day that Ben and Ciara tied the knot. Abe knows that nothing good can come from this. It’s not about Ciara loving Theo, but it’s more of her intentionally trying to hurt Ben.

As Ciara gets ready on her wedding day, she will have an altercation with Claire. The two will get into a huge fight, but that’s just the beginning of the drama. It is teased that Ben is going to kidnap Ciara on her wedding day. Not only that, but Claire and Allie Horton (Lindsay Arnold) actually help him. Even though they might have good intentions, is Ben going way too far? Could he end up in prison because of this? We will have to keep watching the NBC soap to find out.