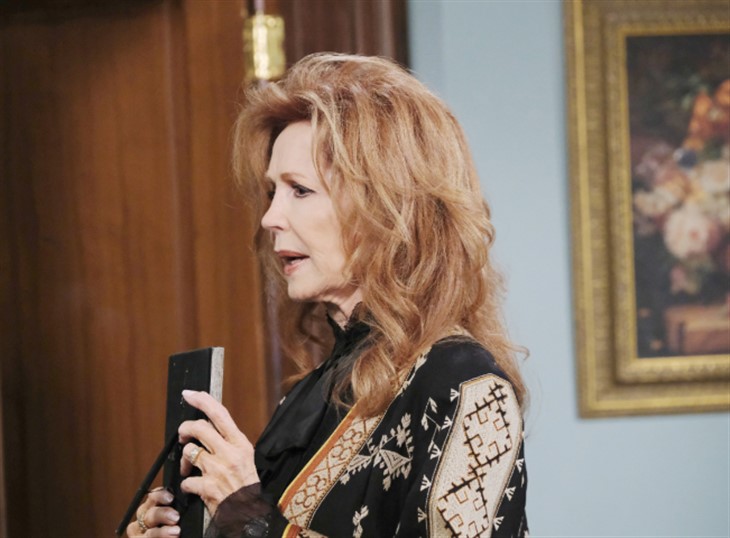 Days of Our Lives (DOOL) spoilers for the week of January 18 reveal that Maggie Horton Kiriakis (Suzanne Rogers) has a warning. She confronts Justin Kiriakis (Wally Kurth) and tells him he is making a huge mistake with Bonnie Lockhart (Judi Evans). This can go one of two ways. Either it’s warning Justin of Bonnie or Maggie is trying to keep the couple together.

DOOL spoilers reveal that Justin and Bonnie have oddly formed a friendship and now a romance. It is strange how it all came about considering what Bonnie did to Adrienne Kiriakis (also played by Judi Evans). Even though Bonnie tried to make things right and donated her book royalties to charity, that doesn’t seem to undo the damage that she caused. However, writers insisted on pairing them together, so here we are.

We have seen a few Salemites start to not hate Bonnie so much, such as Jennifer Horton (Cady McClain). Then, Victor Kiriakis (John Aniston) allowed Bonnie to stay at the family Christmas event. That alone was odd and no explanation was ever given for Victor’s change of heart. When Eli Grant (Lamon Archey) and Lani Price Grant’s (Sal Stowers) twins are kidnapped, Bonnie will help with the search. She will also give a piece of critical information that could lead to identifying the person responsible.

Days of Our Lives spoilers from the new issue of Soap Opera Digest reveal that during the week of January 18, Maggie will give Justin a warning about Bonnie. Under normal circumstances, we would say she is going to warn Justin that he shouldn’t be dating someone like Bonnie. That he will just get hurt and it would be an insult to Adrienne’s memory.

However, in light of everything that’s happened over the past few months and Bonnie helping with the kidnapping investigation, we are going to say it’s the opposite. Could Justin be having second thoughts about Bonnie? If so, is it possible that Maggie encourages him to stick with her? If Maggie and Xander Kiriakis (Paul Telfer) can become BFF’s, then anything is possible.

It should be interesting to see how Justin and Bonnie’s relationship develops. They are polar opposites and she probably drives Justin crazy. However, that can be both a good and a bad thing. So, we will have to see what happens in the next few weeks.

What do you think Maggie’s warning to Justin is about? Will she try to split up the couple or encourage Justin to stay with Bonnie, even after everything she has done? What would you prefer to see happen with this storyline?