B&B Wednesday July 7 Spoilers: Hope Gets The Shock Of Her Life 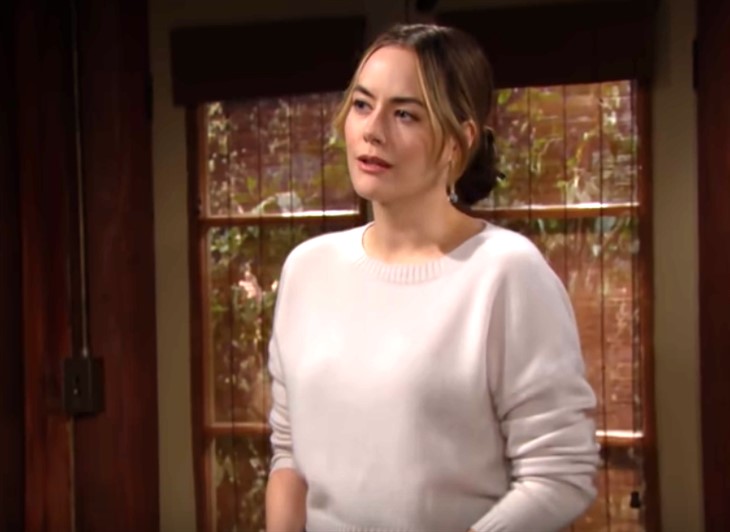 The Bold and the Beautiful (B&B) spoilers for Wednesday, July 7, 2021, reveal Hope doing some digging and following and seeing a sight she never expected.

The Bold And The Beautiful Spoilers – What On Earth Happened To Thomas Forrester?

Hearing Thomas’s (Matthew Atkinson) loud phone in Bill’s (Don Diamont) desk at Spencer Publications allows a bell to go off in Hope’s (Annika Noelle) head. Where has Thomas been? She hasn’t seen him in days and it’s not like him to be away from Douglas (Henry Joseph Samiri) for so long. Plus, how did his phone get in Bill’s desk of all places? Justin’s explanation makes no sense and Hope begins suspecting something else is going on so she decides to follow Justin.

Hope does not expect to be led into a creepy basement but that’s exactly where she ends up. She can’t believe her eyes when she sees Thomas is down there in a cage and is even more shocked to know Justin (Aaron D. Spears) is the one keeping him there. Since when did Justin do things like this? He is supposed to be Bill’s right-hand man and the lawyer working on Liam’s (Scott Clifton) case.

Why would he lock Thomas in a cage? As for Thomas, he can’t believe Hope is actually there and he has someone to tell his story to. And boy is this story a doozy. Hope better sit back and relax as she learns what really happened the night Vinny (Joe LoCicero) was killed.

Now that Wyatt (Darin Brooks) is over the shock of learning his mother slept with Carter (Lawrence Saint-Victor) and completely ruined her marriage to Eric (John McCook), he turns his attention towards his brother and father and why they are still behind bars. Liam hitting Vinny and killing him never made sense to him anyway, but the fact that Bill and Liam are still in jail and not out on bail is even odder.

The Bold and the Beautiful spoilers tease Watt questions Justin about what is going on with their case but Justin has no good answers for him and just tells him to be patient. Too bad Wyatt is a Spencer and patience isn’t their strong suit. Justin now finds himself with a very curious family member who may ruin all his plans.

Stay tuned to The Bold and the Beautiful weekdays to see how this story plays out.  Keep checking Soap Opera Spy daily for more B&B spoilers, news, and updates.

The Young And The Restless (Y&R) Spoilers – Triangle Trouble For Tara, Jack, And Sally