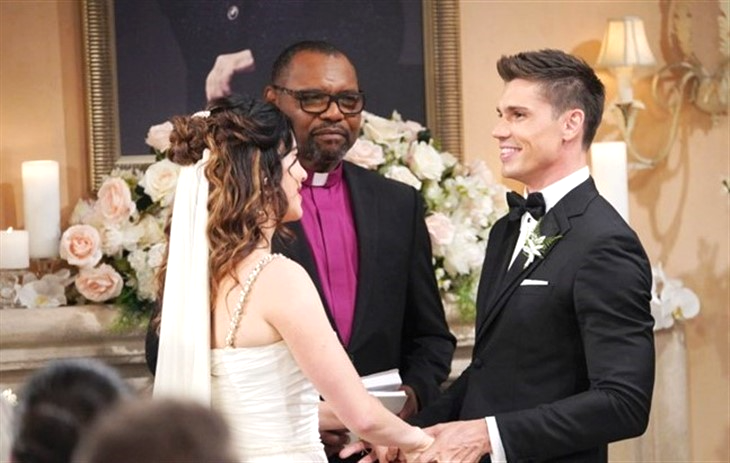 The Bold and the Beautiful (B&B) spoilers for the week of August 2-6 tease that in Los Angeles there’s a soaptastic wedding to look forward to and a new picture goes up on Eric Forrester’s living room wall. Has he found a new woman to replace Quinn Forrester (Rena Sofer) already?! That was fast.

Actually, he will put his late wife Stephanie Forrester’s (Susan Flannery) portrait back up, which may signal he’s out of the dating pool for good. Likewise, John “Finn” Finnegan (Tanner Novlan) is off the market and he and Steffy Forrester (Jacqueline MacInnes Wood) finally marry.

The nuptials bring his parents to town and you can bet they pack a boatload of drama and secrets in their suitcases. How will Steffy will react to a bombshell he forgot to mention to her?

Explosive show spoilers reveal that Finn’s dad, Jack Finnegan (Ted King) and Ridge Forrester (Thorsten Kaye) get acquainted but do they hit it off or find territorial issues to fight about?

Elsewhere Steffy asks Hope Spencer (Annika Noelle) to be her matron of honor since she has no friends.

Steffy and Finn’s wedding is the hottest ticket in town but for some reason, Carter (Lawrence Saint-Victor) and Quinn aren’t invited. Sour grapes much, Eric?

Don’t worry about Quinn and Carter though, they have plenty to keep them busy, perhaps licking their wounds at being snubbed by ripping each others’ clothes off. In front of rejected Quinn’s portrait.

Viewers will see just how much Finn adores Steffy the night before the wedding—no expenses spared!

Who will marry Steffy and Finn? Carter is usually the go-to officiant but this time around the person in charge of the I do’s could shock you. Might it be Steffy’s mysteriously absent mom, Taylor Hayes (Hunter Tylo)?

Explosive show spoilers reveal that a mysterious woman pops up at the wedding and we can’t guarantee that the nuptials go off without a hitch!

The Bold And The Beautiful Spoilers – Sinn Wedding Is A Go

Meanwhile where is Finn’s mom, Li Finnegan (Naomi Matsuda)? Is there an estrangement between them? The answer is revealed when the mother of the groom makes a stunning entrance and not a moment to soon—to object?