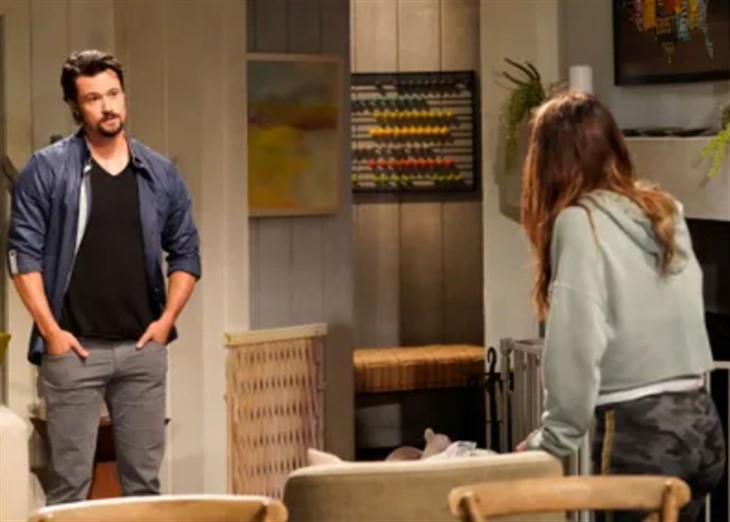 The Bold and the Beautiful spoilers (B&B) for Tuesday, October 5, 2021, reveal in Los Angeles Steffy and Thomas Forrester spending some sibling time bonding and Steffy has some major concerns.

The Bold And The Beautiful Spoilers – Is Thomas Forrester Really And Truly Over Hope Logan?

While Hope Logan Spencer (Annika Noelle) has been spending more friend time with Finn (Tanner Novlan) lately than Thomas Matthew Atkinson), that doesn’t mean Steffy (Jacqueline MacInnes Wood) still isn’t worried about her brother. (Should she worry about her latest husband turning to Hope the same way Liam always did?)

As Steffy and Thomas talk about what’s been going on in their lives, Steffy tells Thomas to ensure he has no lingering feelings for Hope. After all, he was so obsessed with her he thought a mannequin was Hope and even dated and kissed the mannequin. We later learned that little incident was due to a brain injury.

Thomas assures his sister he is well aware that there is no future between him and Hope and they are only co-parenting. However, Steffy thinks it’s time that Thomas finds a new woman to love. Is Thomas ready for a new woman in his life? Who could the new woman even be?

B&B Spoilers – Paris Buckingham Has A Shocker For Zende Forreter

Now that Paris Buckingham (Diamond White) realizes she was becoming a little too attached to Finn while living in Steffy’s house, she’s all moved out. She also realized her Finn obsession was taking time away from Zende Forrester (Delon De Metz). As she flirts with the man who is supposed to be her boyfriend when they meet up at the design office, Paris realizes she needs to make things up to him if this romance has any way of surviving and lasting.

To that end, Paris plans a major surprise for Zende that involves America’s favorite pastime in a major league baseball park. What could be more romantic than a baseball game at Dodger Stadium? Well, Paris has more in mind than just popcorn, peanuts, and Cracker Jacks as they root, root, for the home team. But you’ll have to wait till Wednesday to learn the big-time move she makes. Stay tuned to The Bold and the Beautiful weekdays to see how these stories play out.